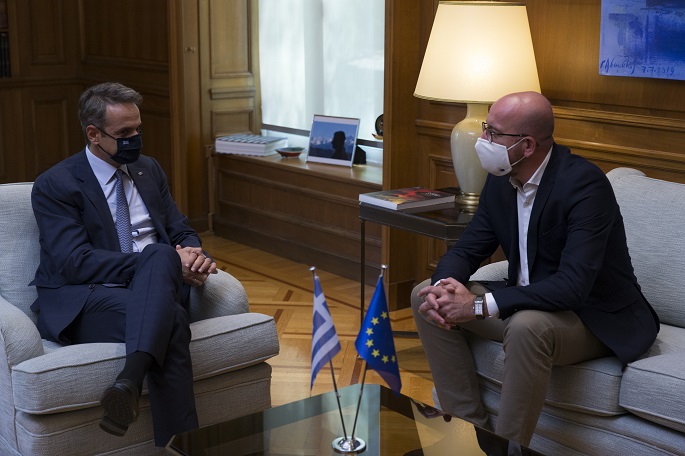 Security and stability in the Eastern Mediterranean is an issue that does not concern only Greece and Cyprus, but the European Union (EU) as a whole, European Council President Charles Michel said on Tuesday during joint statements with Greek Prime Minister Kyriakos Mitsotakis after their meeting in Athens, reported Xinhua.

"The issue of security and stability in the Eastern Mediterranean is not an affair of Greece and Cyprus alone, but an EU issue. We believe that all the member states must be respected and this is the meaning of my presence here today, to repeat this message," Michel was quoted by Greek national news agency AMNA as saying.

Michel paid a visit to Greece to discuss tension in the region lately over maritime borders and exploitation rights of energy resources, as well as the refugee-migration challenge after the destruction of Moria, Greece's largest reception camp on the island of Lesvos by a series of fires last week.

The situation in the Eastern Mediterranean and EU-Turkey relations will be discussed in the upcoming Special European Council on Sept. 24-25, during which the EU should demonstrate its unity and strength because security and stability are strategic interests of the EU, he added, according to AMNA.

Mitsotakis said on his part during the joint statements to the press, which were broadcast on Greek national broadcaster ERT, that the Mediterranean Sea is a vital security zone for entire Europe. "Therefore, support to Greece and Cyprus is not only a demonstration of solidarity but a clear acknowledgment that the EU's geopolitical and strategic interests are at stake here," he elaborated.

After the Turkish seismic survey vessel Oruc Reis returned to Turkey last weekend after weeks of research in a disputed area, the Greek prime minister said Greece expects more positive steps and an end to "provocations" to restart dialogue with Turkey over the delimitation of maritime borders.

In August, Turkey dispatched Oruc Reis and two auxiliary navy vessels to the disputed region near the Greek island of Meis, also known as Kastellorizo, where Greece claims lies within its continental shelf.

"Turkey has time, before and after the EU summit, to follow up the first encouraging step of disengagement from the crisis. If we see tangible proof of good behavior, we are ready to begin exploratory contacts with Turkey at once on the sole difference that exists between us, the delimitation of maritime borders in the Aegean and Eastern Med," Mitsotakis said.

"Until there is a final delimitation, however, either through a bilateral agreement or through an international court ruling, the international law of the sea prohibits unilateral actions," he stressed.

Regarding the refugee, migration challenge, Michel stressed that Greece and other countries at the forefront of the influx in recent years have shouldered disproportionate burdens and the EU is ready to find a common effective response through a new policy on the issue.

The European Council president was scheduled to visit Lesvos island in the northeastern Aegean to personally see the reality the EU faces.

Lesvos received the bulk of the massive flow of more than one million people who reached Greece since 2015, mainly from Turkey.

"It is time this European support will be translated into tangible solidarity and will be shown with actions and not words so that we can succeed where we had the courage, in my view, as the EU to admit that we have failed in the past," Mitsotakis said on Tuesday.

The Greek PM also stressed that with the support of other EU partners the new hosting facility under construction on Lesvos will offer better living conditions than Moria.

Meanwhile, Greek Citizen Protection Minister Michalis Chrysochoidis announced from Lesvos that five young foreign nationals were arrested for the arson in Moria, while another, who has been identified, is still at large.

Greek authorities said that the series of blazes that turned the camp to ashes started when few of a total of 35 camp residents who had tested positive for COVID-19 resisted isolation measures.