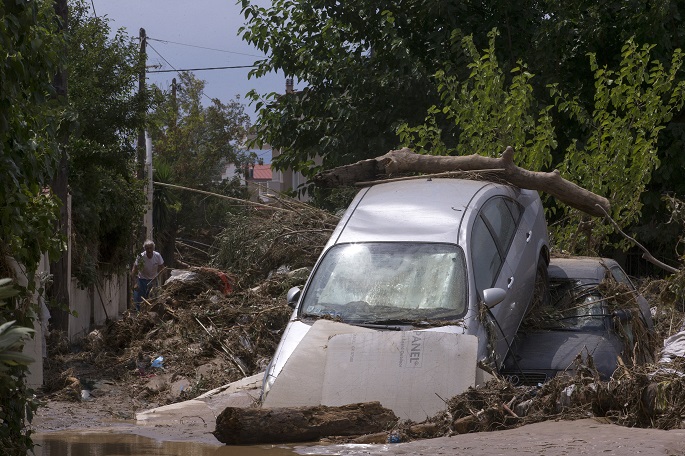 The death toll from the extreme weather phenomena which swept through Evia island in central Greece on Sunday climbed to seven with two more people were found dead, according to the latest announcement by local authorities, reported Xinhua.

AMNA news agency reported that a 42-year-old man and his 37-year-old wife were found dead inside their house which was flooded.

Earlier, a missing woman was found alive and rescued by a helicopter near her house in Bourtzi. Rescue teams were still in operation to locate a second person missing in the same area.

The overnight strong storm that struck the central part of Evia island, the second-largest island after Crete, turned roads into raging rivers of mud, flooded houses and businesses, and carried away cars along with tons of debris. Two rivers burst their banks and filled roads with mud.

Rescue teams were going door to door to evacuate people. Helicopters were also involved in the operation.

"The water reached more than 1.5 meters. Damages are so many; we cannot start from zero again. We are not young... We have been destroyed completely," Elena from Bourtzi village told Xinhua as she was emptying her house from the mud.

For George, another citizen in Bourtzi, the damages in his house were severe. "Where should I go?" he kept asking.

Many local roads were destroyed, cutting the road connections to the island. Electricity and water supply were also cut off for many hours, making the rescue operations even harder.

The villages of Politika and Psaxna, north of Halkida city, about 100 km from Athens were the first areas that were hit by the flash floods.

After Halkida, the storm moved southward to the areas of Bourtzi and Lefkanti.

Two elderly people, an 86-year-old man and an 85-year-old woman, as well as an 8-month-old baby, were found dead in the area of Politika.

While two more, a 74-year-old man and a 73-year-old woman were swept away by the floodwaters in Bourtzi.

Deputy Minister for Civil Protection and Crisis Management at the Ministry of Citizen Protection Nikos Hardalias said that they lost their lives in their attempt to escape from the violent storm.

"The intensity of the weather phenomenon was so huge that affected the infrastructure sector. We had an estimation for 63 millimeters of rainfall in 24 hours, while the storm reached 350 millimeters within six hours. We did not have a correct estimation. We would have acted differently," Hardalias pointed out.

According to the latest update, the Fire Brigade received 664 calls, including 97 calls asking for help from people trapped in houses or cars.