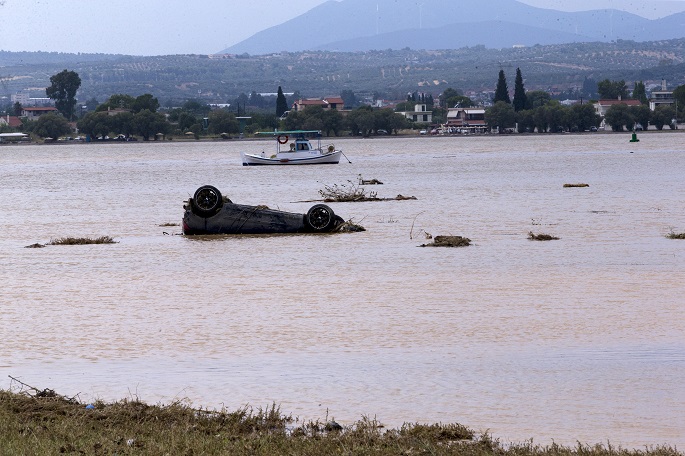 Photo taken on Aug. 9, 2020 shows a vehicle submerged in the water after a heavy storm in Bourtzi, Evia island, Greece. Photo Xinhua.

A strong storm hit the Evia Island in central Greece on Sunday overnight, leaving five people dead, two others missing as well as material damage in houses and streets.

Deputy Minister for Civil Protection and Crisis Management at the Ministry of Citizen Protection, Nikos Hardalias, announced the updated number of two more casualties after a meeting at the town hall of Vasiliko village.

He said that they lost their lives in their attempt to escape from the violent storm.

Earlier, an 86-year-old man, an 85-year-old woman, as well as an 8-month-old baby, were found dead in their flooded homes in the village of Politika, north of the city of Halkida, about 100 kilometers from Athens.

According to the local mayor, the baby and the baby's parents were on vacation in the area.

Greek Prime Minister Kyriakos Mitsotakis, who will visit the area on Monday, was constantly being informed on the developments in Evia.

The overnight storm turned roads into raging rivers of mud that carried away cars and flooded homes. Firefighters continued to rescue those trapped in their houses. In many places, the water reached more than 1.5 meters.

At least 495 calls were made to the Fire Brigade, of which 47 concerned people trapped in their houses and cars. The rest were calls to drain flooded houses.

According to local authorities, 3,000 houses have been damaged by the storm.

A gradual weather improvement was expected late on Sunday evening, the fifth and last day of the weather front "Thalia" that swept Greece.