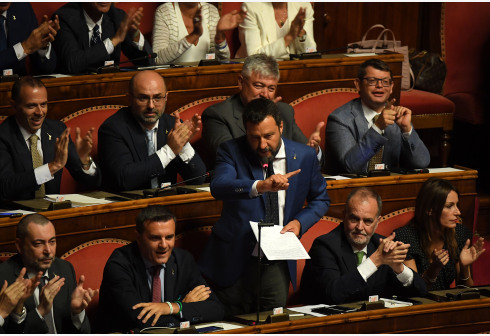 A majority of senators gave green light to the decision, and the detailed count of votes was expected later in the evening.

If found guilty, the former minister -- who is the leader of rightwing League party -- could face up to 15 years in jail for illegally detaining the migrants, besides being barred from any other political office.

A 23-member parliamentary panel had voted in favor of lifting Salvini's immunity in January in line with the recommendations issued in December by Italy's special tribunal dealing with alleged crimes committed by government ministers.

The probe on Salvini was opened by prosecutors in Catania.

The incident sparking their investigation took place in late July 2019, when 131 migrants on board a distressed boat were rescued in the Mediterranean by Italian coast guard ship Gregoretti.

Salvini -- serving as interior minister at the time, in the first cabinet led by Prime Minister Giuseppe Conte -- pledged to stop illegal immigration and curb sea arrivals from northern Africa.

This hardline stance came after Italy, along with Greece, had been receiving the most of migrant and refugee sea arrivals from the Libyan coasts for years.

Most of the rescued migrants were thus blocked on board the Gregoretti, which docked at a Sicilian port for six days, until other European Union (EU) countries agreed to accept some of them.

Salvini has proudly defended his decision, and his overall stance on immigration as interior minister.

"Relaxed and with my head held high," he wrote on his Facebook page soon after Senate's vote on Wednesday.

"I will claim my work as minister, because defending my homeland was not my right, it was my duty," he said.