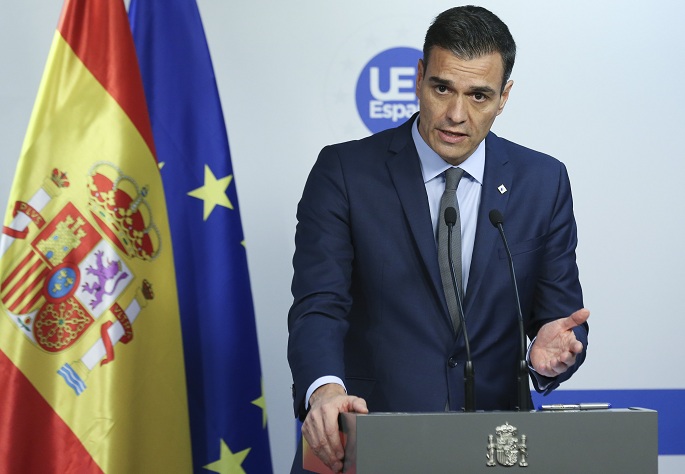 Acting Spanish Prime Minister Pedro Sanchez will meet the leaders of the country's main political parties on Wednesday following another day of protest in the Catalan region of north-east Spain.

Sanchez will meet Pablo Casado, the leader of the right wing People's Party (PP), Albert Rivera, who leads the center-right Ciudadanos party and Pablo Iglesias, who is the leader of the left wing, the United We Can.

The meetings have been called after a second day of protests at the sentences of between 13 and 9 years given to Catalan separatist leaders for their role in the Oct. 1, 2017 independence referendum, which was declared illegal by the Spanish Constitutional Court.

On Monday over 100 flights were cancelled from Barcelona's El Prat airport due to the protests and dozens of people needed medical attention, according to local medical services. On Tuesday about 100 people were injured and 51 others arrests in violent clashes in the cities of Barcelona, Tarragona and Lleida.

According to Spanish TV network RTVE, at least 26 police were also injured in the violence.

Twenty-nine people were detained in Barcelona, 14 in Tarragona and 8 in Lleida as mobs threw stones at both Spanish National Police and the Catalan Regional Police force (Mossos d'Esquadra).

On Wednesday morning, the acting prime minister, posted a tweet, expressing his "firm and categorical condemnation of the violence which looks to break the coexistence in Catalonia," and his "determination" to "guarantee the security."

Former Catalan deputy leader, Oriol Junqueras, who on Monday was given a 13-year sentence for sedition and misuse of government funds, on Wednesday called for an end to the violence, saying it "doesn't represent us."

Meanwhile the acting President of the Spanish Congress, Meritxell Batet, has ruled out the government applying Article 155 of the Spanish Constitution to suspend the autonomy of the Catalan region, or the National Security Law, which would allow central control of security forces in the region.