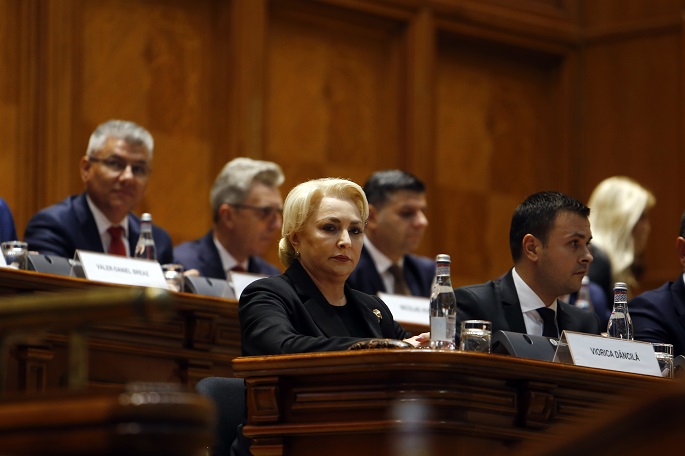 Romania's Social Democratic government collapsed on Thursday, losing a no-confidence vote initiated by the main opposition National Liberal Party (PNL) and supported by almost all the other parties in parliament.

The motion of no confidence garnered 238 votes in favor, five more than the required minimum of 233, or 50 percent plus one in the 465-seat bicameral parliament.

Thus the cabinet led by Social Democrat leader Viorica Dancila became the fourth government to fall in Romania in the last 30 years. Dancila's cabinet has failed to survive the crisis after it was abandoned by its coalition partner in late August and lost the overall majority in parliament.

"We respect the parliament decision of today ... We leave with fulfilled duty. We have managed to accomplish many things," Dancila told Parliament, after the censure motion was adopted.

"We are going ahead with the presidential candidacy," she added, stressing that she will remain Chairwoman of the Social Democratic Party.

In another camp, PNL leader Ludovic Orban said that his party's proposal for the position of prime minister "is in the person of the PNL chairman, that's me," if the party will be called to form the new government.

According to him, the cabinet formula will be flexible, efficient, with as few ministers as possible, maximum 16 ministries.

Under the constitution, the president shall designate a candidate to the office of prime minister, as a result of his consultation with the parties represented in the parliament. Within 10 days, the nominee will seek the approval of the parliament on the program and the complete list of the government.

The government was toppled exactly one month before the presidential elections scheduled for Nov. 10. Both the incumbent president and the outgoing prime minister are running for the highest office in the country.

The Social Democrats won the parliamentary elections at the end of 2016 and subsequently formed the two-party coalition government with the Alliance of Liberals and Democrats which left later.

Dancila became the third prime minister of the coalition government in January 2018. She assumed the party's top position in late May this year after her predecessor, Liviu Dragnea, had been sentenced to prison.