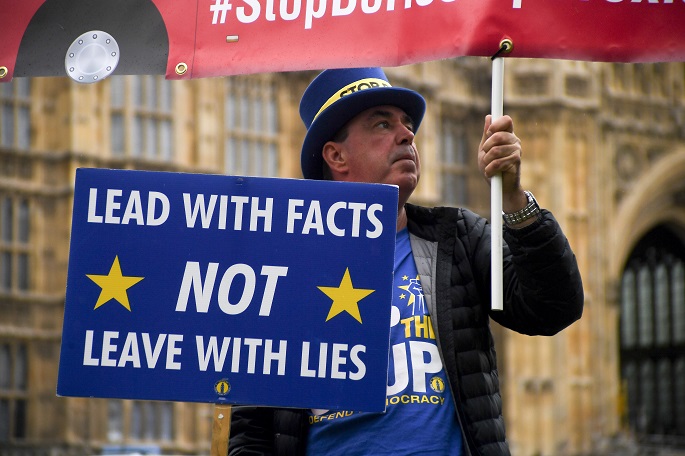 A demonstrator stands outside the Houses of Parliament holding placards in London, Britain, on Sept. 9, 2019. Photo Xinhua.

A no-deal Brexit could trigger a recession lasting four quarters in Britain, with the country's gross domestic product (GDP) contracting by 1.5 percent in 2020, the accountancy firm KPMG warned on Monday.

KPMG economists said that trade disruption under a no-deal Brexit would damage the British businesses, while potential shortages of imported foods and medicines are likely to undermine consumer confidence.

A no-deal Brexit could also significantly dent exports in 2020, causing delays at the border and confusion about regulations. "While both the Bank of England and the UK government would be likely to offer monetary and fiscal policy support, their headroom for action is limited," KPMG said.

At the same time, KPMG believes that a Brexit deal that would finally resolve some of the uncertainties about Britain's future trading relationship with the EU could lead the British economy to perform better than previously expected in 2020 and allow the Bank of England to keep the base interest rate at the current 0.75 percent level until at least Nov. 2020.

According to KPMG, a Brexit deal could prompt an appreciation of the British pound by as much as 15 percent and enable businesses to recommence their investment plans. With a strong labor market providing support for further consumer spending, an orderly departure from the EU on Oct. 31 is expected to help the British economy rebound, with GDP growth reaching 1.5 percent in 2020.

Yael Selfin, chief economist at KPMG UK, said: "With the Brexit debate poised on a knife edge, the UK economy is now at a crossroads. It is difficult to think of another time when the UK has been on the verge of two economic outturns that are so different, but the impact of a no-deal Brexit should not be underestimated.

"Despite headwinds, such as the slowing global economy and limited domestic capacity, the UK economy now has the potential to strengthen over the next 12 months. But a no-deal Brexit could put paid to this upside, triggering the UK's first recession for a decade," she said.