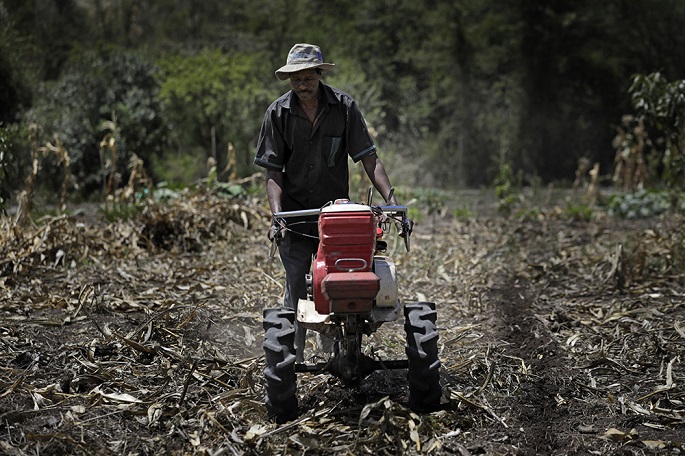 In the county of Laikipia, the EU supports farming methods that minimise the evaporisation of soil moisture and yield crop with less irrigation. Press Release Photo by Liisa Takala.

The values of the EU member states are reflected, for example, in the development cooperation of the environment and energy sectors, said a foreign ministry press release quoting Head of Cooperation at the EU delegation to Kenya Hubert Perr.

The union plays an important role in implementing the goals of the United Nations.

In the meeting, currently held in New York on reviewing the implementation of the UN Agenda 2030, the EU will, for the first time, report on its measures for attaining the Sustainable Development Goals.  The union is very important also globally, because together with its member states, EU is the world’s largest donor of development aid. Last year, 18 per cent of Finland’s development aid was channelled through the EU.

Sustainable Development Goals are promoted by means of EU aid, for example in Kenya. Head of Cooperation of the EU delegation to Kenya Hubert Perr said in many projects and programmes it is justified for member states to act independently. The added value of EU cooperation can especially be seen at multilateral negotiating tables:

“For example in terms of political and policy dialogue, in a country like Kenya, a single member state might not get very far, but when the EU speaks in one voice with the government and the key stakeholders, we are heard and regarded as a serious partner.”

Jobs for the youth

Kenya is also one of Finland's bilateral partner countries. Perr wants to thank Finland for its strong support in planning the joint cooperation strategy between the EU, 19 member states and Kenya.

During the past two decades, Kenya has taken a huge leap forward, for example in education and health. The annual economic growth of 5 to 6 per cent has reinforced the private sector, and in 2015 the World Bank classified it as a lower middle-income country. In Kenya, the EU will now particularly focus on creating jobs:

“Around million young people enter the Kenyan labour market every year, which is a huge challenge. We cooperate a lot with the private sector and focus on the development of agriculture.”

The EU is also involved in developing good governance that, according to Perr, is the backbone of sustainable development: even at times of strong economic growth, it must be ensured that it’s beneficial also to the poorest.

“Every 2-3 years, Kenya suffers from difficult periods of draught, like this year. We support the government in ensuring food security also in difficult times.”

One example of addressing the worsening droughts is a conservation agriculture project in cooperation with the United Nations Food and Agriculture Organisation (FAO), in which soil fertility and productivity are maintained by methods increasing the capture of humidity and nutrient levels. The project has been implemented in eight counties in Kenya and more than 26,000 farmers have benefited from it.

The climate measures also include plans for the reform of the public transport in Nairobi. The aim of more efficient bus transport services is to get thousands of cars away from the crowded streets.  The EU has also provided support for the construction of the largest wind-farm in Africa.

“We only finance green energy programmes, and not, for example, coal power. The EU does not only direct a certain amount of the funds for climate programmes but all our development cooperation must also pass strict environmental and social impact assessments,” Perr says.“This is where the EU is at its best and what we are also valued for by our countries of cooperation.  Together with the UN we form a strong partnership in promoting the sustainable development goals.”