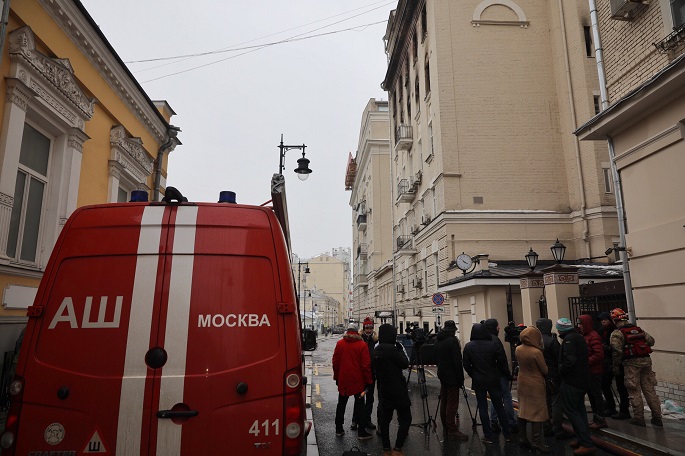 Photo taken on Feb. 4, 2019 shows the apartment building where a fire broke out in Moscow, Russia. File Photo Xinhua/Bai Xueqi.

At least one person was killed and 13 others were injured in a major fire that broke out Thursday at a heat-and-power plant in the Moscow region, the Russian Emergencies Ministry said.

"One person was found dead. A total of 13 people were injured, of whom one was hospitalized and 12 people were examined on an outpatient basis," the ministry said in a statement.

The fire took place at a high-pressure natural gas station in the plant in the city of Mytishchi, north of the Russian capital, and impacted an area of 800 square meters, according to the ministry.

A number of technical facilities and an administration building on the premises of the thermal power plant were reportedly damaged as a result of the fire.

At the moment, the flames, which were reportedly 50 meters high, have been eliminated, the emergencies ministry said.

A total of 160 people and 52 units of equipment, including three helicopters and two fire-fighting trains, were sent to the scene, the statement said.

A preliminary investigation showed that the accident started from an oil tank which caught on fire, according to the Russian Energy Ministry.

Moscow is at no risk of blackout despite the fire, as backup generators have been switched on, it added.

The gas-powered thermal plant, which went into operation in 1992, provides electricity and heat to residents in Mytishchi as well as north and northeast of the Russian capital.