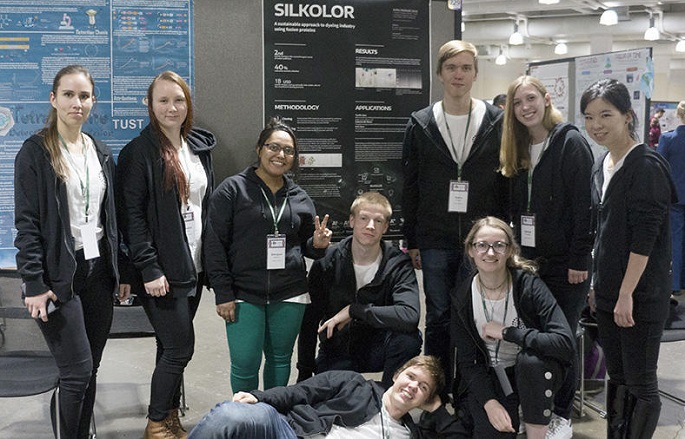 A team consisting of University of Helsinki and Aalto University students brought home a gold medal from the iGEM. Press Release Photo.

The Aalto-Helsinki team brought home gold medal from this year’s iGEM Giant Jamboree received for developing a potential solution to water pollution by textile dyeing, said the University of Helsinki in a press release.

Over 300 teams and almost 6,000 students from universities across the globe participate in the competition every year with innovations and solutions to tackle a wide range of issues from diseases to environmental pollution using the tools of synthetic biology.

The teams also help standardise the field by contributing biological parts BioBricks and conducting measurements. During the fall, all the iGEM teams gather in Boston in a Giant Jamboree to share their ideas and accomplishments with others and the world.

In October, the Aalto-Helsinki team made of 10 students in the fields of biosciences, design, sustainability, business and physics in the Aalto and Helsinki universities brought home the gold medal from the Giant Jamboree 2018. The Finnish team also received a nomination for the Best Product Design in the special track award category.

The Aalto-Helsinki team had been working from this spring to fall to develop a potential solution to an international environmental problem: Textile dyeing polluting water systems. In many countries with large-scale textile industry, such as India and Bangladesh, part of the synthetic dyes used in the plants end up in nearby rivers and lakes. Many of these synthetic dyes are both hazardous to health and slow to biodegrade.

The solution invented by the Aalto-Helsinki team is christened Silkolor, a sustainable approach to the dyeing industry using fusion proteins. As such, Silkolor is an attempt to revolutionise the textile dyeing process by producing pre-dyed silk fibres and biodegradable protein-based dyes, which could be used in the future as a more environment-friendly alternative to current dyeing practices.

This is for the fifth time that the Aalto-Helsinki team has participated in the iGEM Competition, every year with a new team. They still represent the only team from Finland. Currently, Aalto-Helsinki is recruiting students from their home universities to form the next year’s team.