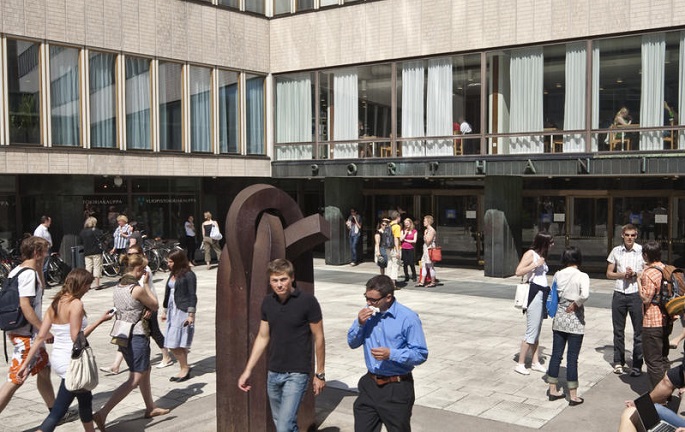 SIMHE's familiarises its clients with the Finnish higher education system. Its mission is to provide them with application and career guidance. Press Release Photo by Ari Aalto.

Applying for higher education requires language skills, familiarity with the Finnish education system and evidence of personal skills from immigrants.

To make better use of immigrants’ skills and to encourage them to apply for further education, six institutions of higher education established SIMHE (Supporting Immigrants in Higher Education), a service network targeted specifically at immigrants, said a press release of the University of Helsinki.

When Majd Al-Sagheer moved to Finland in 2014, she had recently graduated from upper secondary school. A study place in dentistry at a Syrian university awaited her, but she emigrated from the country and never embarked on studies there. Nevertheless, Al-Sagheer did not give up on her dream of a research career.

“I knew that getting into a university in Finland requires a lot of work, but I still wanted to study pharmacy at the University of Helsinki,” Al-Sagheer said.

Now, four years later, she is an exception at the university. Thousands of people move to Finland every year, but few immigrants end up studying in a university.

Many have basic education suitable for higher education, such as a prior degree from upper secondary school or university in their home country, but for one reason or another, their skills are left unused in Finland.

“SIMHE wants to be of help at those stages of application where immigrants come across obstacles,” said Education Planning Officer Sonja Mitroshin.

Mitroshin is in charge of SIMHE at the University of Helsinki. The service was launched in spring 2018.

SIMHE familiarises its clients with the Finnish higher education system. Its mission is to identify immigrants among the clients of the admission services of higher education institutions and to provide them with application and career guidance. The advisers can, for example, steer applicants to another educational institution or supplementary education, if an option better suited to the career aspirations of an applicant is available elsewhere.

The service is intended for those who have not completed comprehensive school or upper-secondary education in Finland. Their reason for coming to Finland is irrelevant.

“For six months, I studied nothing but Finnish. Then I applied to the Eira High School for Adults to be able to complete upper secondary studies in Finnish.”

Al-Sagheer has also completed upper secondary education in Syria, but she wanted to learn mathematics and chemistry also in Finnish.

“I already possessed all the information, but in Arabic. I wanted to learn the terms in Finnish, in order to apply to university.”

She was also prepared to complete the Finnish matriculation examination, but was accepted to the university just when the examination period was about to start.

Al-Sagheer applied to the university a year before SIMHE was established, facing exactly the kinds of problems the network now aims to tackle.

“After the entrance examination, I received an email telling me that my admission was conditional if I did not submit my original upper secondary school diploma,” Al-Sagheer said.

According to Mitroshin, politicians could do more to facilitate the education of immigrants.

“In Finland, the policies are currently two-fold: new employees are wanted from abroad, while there is already untapped expertise in Finland.”

Indeed, Mitroshin wishes to import an equivalent active party currently working in Norway. There a single authority measures immigrants’ skills and issues statements on the skills of individual applicants accepted by all institutions of higher education. At the moment, each educational institution in Finland separately assesses the eligibility of applicants with no certificate from Finnish schools.

Centralised operations would support the admissions procedure of individual higher education institutions, while the assessment of applicants’ prior expertise would be unequivocally standardised.