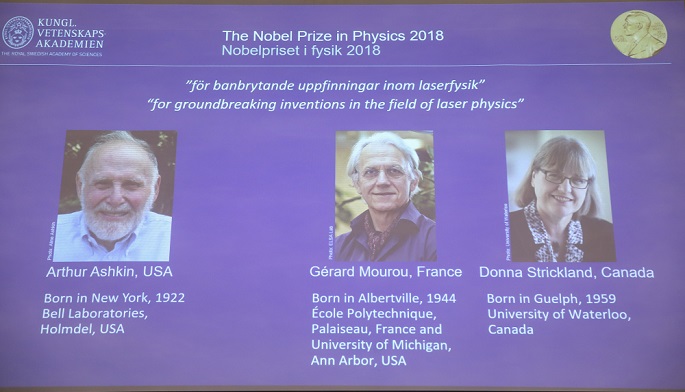 Photo taken on Oct. 2, 2018 shows a screen displaying the portraits of three awarded scientists Arthur Ashkin (L) of U.S., Gerard Mourou (C) of France and Donna Strickland of Canada, for the 2018 Nobel Prize in Physics during a press conference at the Royal Academy of Sciences in Stockholm, Sweden. Photo Xinhua by Ye Pingfan.

The 2018 Nobel Prize in Physics has been awarded to three scientists working the field of laser physics, the Royal Swedish Academy of Sciences announced here on Tuesday.

Half of the award "for groundbreaking inventions in the field of laser physics" went to American Arthur Ashkin and the other half was awarded jointly to Frenchman Gerard Mourou and Canadian Donna Strickland.

Strickland said in a telephone interview with the academy at a press conference that she was happy and surprised to be receiving the prize, which she looked forward to accepting in Stockholm in December.

Commenting on her achievements, she emphasized how she "tries to think outside of the box."

The inventions being honoured this year have revolutionized laser physics. Extremely small objects and incredibly rapid processes are now being seen in a new light. Advanced precision instruments are opening up unexplored areas of research and a multitude of industrial and medical applications, according to a statement released by The Royal Swedish Academy of Sciences.

Ashkin invented optical tweezers that grab particles, atoms, viruses and other living cells with their laser beam fingers. This new tool allowed Ashkin to realize an old dream of science fiction -- using the radiation pressure of light to move physical objects. He succeeded in getting laser light to push small particles towards the center of the beam and to hold them there, according to the statement.

A major breakthrough came in 1987, when Ashkin used the tweezers to capture living bacteria without harming them. He immediately began studying biological systems, and optical tweezers are now widely used to investigate the machinery of life, the statement added.

Mourou and Strickland paved the way towards the shortest and most intense laser pulses ever created by mankind. Their revolutionary article was published in 1985 and was the foundation of Strickland's doctoral thesis.

Using an ingenious approach, they succeeded in creating ultra-short, high-intensity laser pulses without destroying the amplifying material. First they stretched the laser pulses in time to reduce their peak power, then amplified them, and finally compressed them. If a pulse is compressed in time and becomes shorter, then more light is packed together in the same tiny space and the intensity of the pulse increases dramatically.

The statement said there are still innumerable areas of application that have not yet been completely explored.

"This year's discovery is about making strong pulses, but also short pulses. They are so short that we can time them as never before. This is a big area of research at the moment. Many scientists are trying to figure out how can we do this, and if you can do that, you can learn a lot more about many basic processes, of for example, the chemical reactions, how they started. Since we get to know how they happened, we are able to steer it (the process), and we can use our knowledge to design what is going to happen." Eva Lindroth, member of the Class for Physics at The Royal Swedish Academy of Sciences, told Xinhua in an interview after the announcement.

"I think it's really nice that Donna Strickland, as a female scientist, got the Prize this year. It's also important to know that she got this for her doctoral thesis work, so it's a good signal to young people, that you can do something very important very early in your career," Lindroth emphasized.