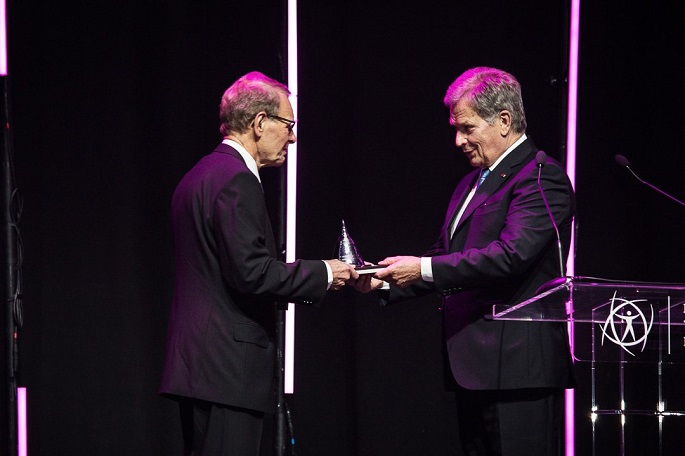 The Finnish Millennium Technology Prize was awarded on Tuesday to physicist Tuomo Suntola.

His atomic layer deposition, ALD, was developed in the 1970s, but made a world impact in the 2000s and is today in all mobile devices and many other gadgets.

ALD is nanoscale technology that helps to manufacture ultra-thin material layers for microprocessors and digital memory devices. The technology allows building of complex, three-dimensional structures, one atomic layer at a time.

The 8th Millennium Technology Prize was presented to Suntola by president Sauli Niinistö in Helsinki. The prize is one million euros.

Tuomo Suntola, now 75, developed the technology and the equipment for the manufacture of thin films in the 1970s. Fundamental research of the technology had been conducted earlier in the Soviet Union.

Suntola said in his acceptance speech the ALD reminds about the important underlying technologies at a time when new models of mobile phones are released all the time.

"Being awarded the Millennium Technology Prize is a great honor for me, especially because the innovation has proved useful in so many applications that improve the quality of life for humanity," Suntola said.

Today the global market of equipment and chemicals used for the manufacture of ALD films is roughly two billion US dollars, and the market value of consumer electronics relying on ALD is at least 500 billion U.S. dollars.

Päivi Törmä, chair of the prize selection committee said the ALD method is an example of a technology hidden from the users, but vital. Törmä said ALD has made "ownership of information technology more democratic". IT equipment has become smaller and less expensive, but more powerful.

Since awarding the first prize in 2004 to Tim Berners-Lee, the inventor of the World Wide Web, the Finnish one-million euro prize, given every two years, has focused on innovations with a societal impact.

Professor Marja Makarow, the chair of the Board of the Technology Academy Finland said the winning innovations must have "extensive positive social impacts, be commercially viable and promote sustainable development and the welfare of humanity".

Makarow told national broadcaster Yle that in the future there should perhaps be more submissions from the environmental technology sector. For the launch of the prize in 2004, the state of Finland joined with technology industry and academic organizations.