Massive demonstration in Budapest for CEU 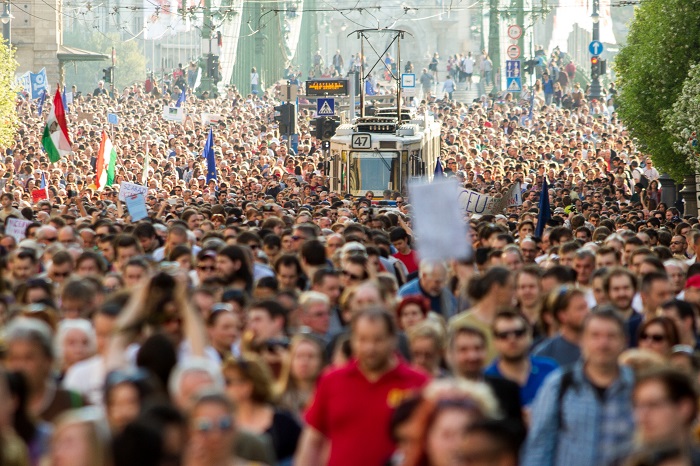 People participate in a demonstration to show support and solidarity with the Central European University (CEU) in Budapest, Hungary, on April 2, 2017. Photo Xinhua.

The demonstrators marched down to the Parliament building where they listened to speeches of the organizers.

Holding flags of the European Union and badges reading "I stand with CEU", demonstrators yelled "We want academic freedom" during the march.

A civil association called Freedom for Education, a group of students, professors, educators, and supporters from Hungary and outside of Hungary, organized the event through the social network Facebook.

The group says that the amendment of the Higher Education Act, due to be debated by the Parliament as soon as Monday, primarily discriminates against CEU, as stated on their official Facebook page.

"This attack is not a single university's issue - this is a challenge to all universities in Hungary... This bill is an attack against the very scholastic freedom and academic autonomy in Hungary throughout the society with long lasting consequences, only beginning from the removal of CEU," the organization warned.

The first speaker of the demonstration, Katalin Torley, leader of the civil movement "I want to teach," said that the government was harming Hungarian education with "cutting expenses or by amending regulations."

She also pointed that the CEU was being slandered for not keeping regulations that were not even adopted.

The Hungarian government submitted a bill to parliament earlier this week, re-regulating foreign institutes of higher education operating in Hungary.

The new law will require an international treaty with the government of the home country of a university operating in Hungary.

Foreign universities will also be required to have campus in both Hungary and their home country, which CEU will fail to meet as it only operates in the Hungarian capital.

Hungarian Prime Minister Viktor Orban said on Friday that the future of CEU depended on talks and an accord between the American and Hungarian governments.

CEU was founded in 1991 and based first in Prague and later in Budapest. It delivers both American and Hungarian diplomas. It currently has approximately 1,400 students and 370 faculty members from more than 130 countries.