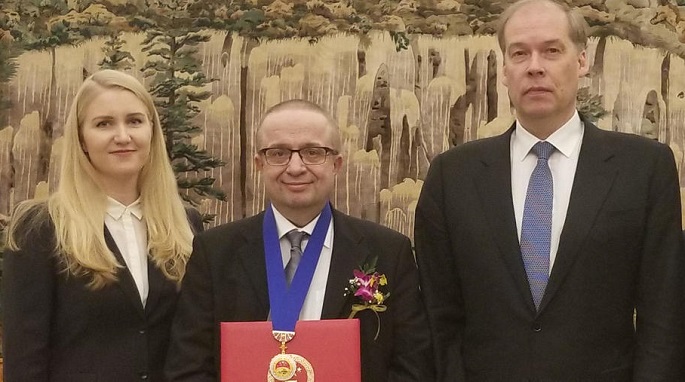 Markku Kulmala has been promoting the scientific and technological development of atmospheric and environmental research and climate change research in China for ten years. Photo Press Release.

Academician Markku Kulmala, Professor at the University of Helsinki, received the International Scientific and Technological Cooperation Award of the People's Republic of China.

Award ceremony was held at the Great Hall of the People, Beijing, on Friday 10 January 2020, said a press release of the University of Helsinki.

Kulmala is a pioneer and world-leading expert in the physics and chemistry of atmospheric aerosol and terrestrial ecosystem meteorology. His research objectives range from the advanced quantum chemistry models to processes relevant on the Earth climate.

Kulmala has created a research program that includes continuous long-term atmospheric observations, global modelling and deep theoretical and experimental process-level studies, which enhance the understanding about atmospheric aerosol dynamics together with their environmental and health consequences.

Over the past ten years, Kulmala has been working in cooperation with the Chinese scientists to enhance scientific and technological development in atmospheric environment and climate change studies in China. He visited China for the first time in October 2009 when the plan of the first SMEAR (Station for Measuring Earth surface - Atmosphere Relations) concept station called SORPES was initiated together with the University of Nanjing.

The International Scientific and Technological Cooperation Award was initiated by the State Council of China in 1994. It is conferred on foreign individuals or organizations that have made important contribution to science and technology development of China. Since 1995 altogether 128 scientists from 24 from different countries have received the award, Professor Markku Kulmala being the first from Finland.