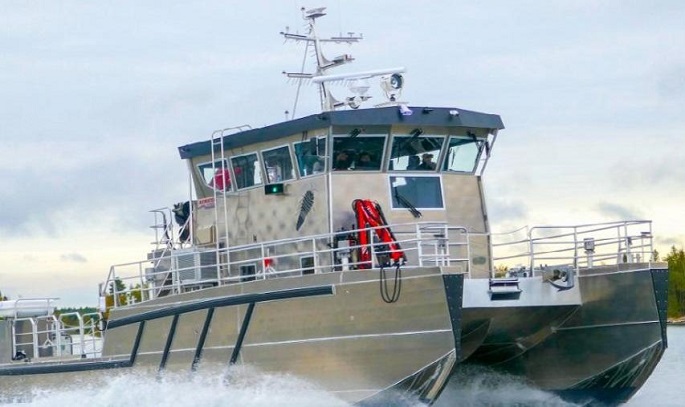 The new research vessel Augusta on its first tour outside the shipyard in Kokkola. Press Release Photo by Jesper Häggblom.

Tvärminne Zoological Station at the University of Helsinki received a new vessel Augusta for its marine offshore research activities near Hanko, said a University press release.

The new research vessel, with a length of 18 meter and a powerful Volvo Penta engine with a top speed of more than 20 knots, is particularly suitable for coastal marine research.

The catamaran, acquired thanks to donations and through the counter-financing programme by the Finnish state, has been built by the Finnish shipyard Kewatec AluBoat in Kokkola.

The aluminum catamaran is equipped with a hull suitable for shallow coastal waters in the Baltic Sea. It is equipped with appropriate lifting and winch devices as well as modern positioning and sampling equipment. There is room enough for field courses onboard with groups up to 30 people, in addition to the crew.

“It is crucial for Tvärminne's research activities that we have a well-equipped boat for high-quality, modern marine research along the coast. The new catamaran significantly improves our ability to function as one of the most important research units in the northern Baltic Sea,” said Alf Norkko, Professor of Baltic Sea Research at Tvärminne Zoological Station.

“With the help of the catamaran we are able to further develop Finland's capacity for coastal Baltic Sea research and contribute to sea research on top international level. The vessel will also be an important part of our increasingly intensive Baltic Bridge research collaboration with the Baltic Sea Center at Stockholm University,” Norkko added.

Maryelle Lindholm Gustavson performed the name giving ceremony in Helsinki on Friday. The ship was named Augusta, and officially handed over to Tvärminne Research Station by the University’s Rector Jari Niemelä, and Stig Gustavson, who holds the Finnish honorary title of vuorineuvos.

The acquisition of the new vessel has been made possible through donations in connection with Stig Gustavson’s 70th birthday.

On this occasion Gustavson chose to direct his birthday donations to a fund specifically supporting the Baltic Sea research at the University of Helsinki. Together with the government's counter-financing program, the donation of about EUR 800,000 enabled the new research catamaran to be acquired for about EUR 1.9 million.

“Given the large savings in the university world, this donation and other new collaborations with private donors, foundations and the business community are extremely welcome,” said Norkko.