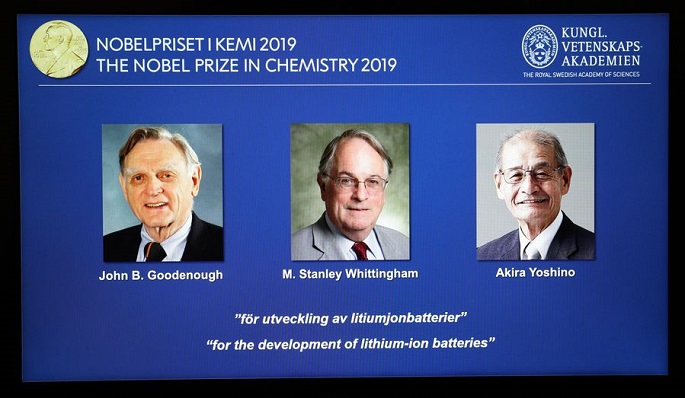 he 2019 Nobel Prize in Chemistry is awarded to three scientists, the Royal Swedish Academy of Sciences announced on Wednesday. Photo Xinhua.

The 2019 Nobel Prize in Chemistry is awarded to three scientists, the Royal Swedish Academy of Sciences announced on Wednesday.

The 2019 Nobel Prize in Chemistry has been awarded to John B. Goodenough, M. Stanley Whittingham and Akira Yoshino "for the development of lithium-ion batteries."

According to a press release here, Whittingham worked on developing methods that could lead to fossil fuel-free energy technologies.

"The foundation of the lithium-ion battery was laid during the oil crisis in the 1970s... He started to research superconductors and discovered an extremely energy-rich material, which he used to create an innovative cathode in a lithium battery," said the press release.

About Goodenough, the press release said "after a systematic search, in 1980 he demonstrated that cobalt oxide with intercalated lithium ions can produce as much as four volts. This was an important breakthrough and would lead to much more powerful batteries."

With Goodenough's cathode as a basis, Akira Yoshino created the first commercially viable lithium-ion battery in 1985, according to the release.

"Rather than using reactive lithium in the anode, he used petroleum coke, a carbon material that, like the cathode's cobalt oxide, can intercalate lithium ions," said the release.

"The Nobel Prize in Chemistry 2019 rewards the development of the lithium-ion battery. This lightweight, rechargeable and powerful battery is now used in everything from mobile phones to laptops and electric vehicles. It can also store significant amounts of energy from solar and wind power, making possible a fossil fuel-free society," concluded the press release.

M. Stanley Whittingham, born 1941 in the UK, is Distinguished Professor at Binghamton University, the State University of New York, USA.

Akira Yoshino sounded very delighted in the telephone interview during the press conference. He said that "curiosity" was the major driving force for his researches. He also said that climate change was a "very serious issue now," and that lithium-ion batteries can be of great help to this problem.

The prize amount is 9 million Swedish krona (about 1 million U.S. dollars) and will be shared equally among the Laureates.