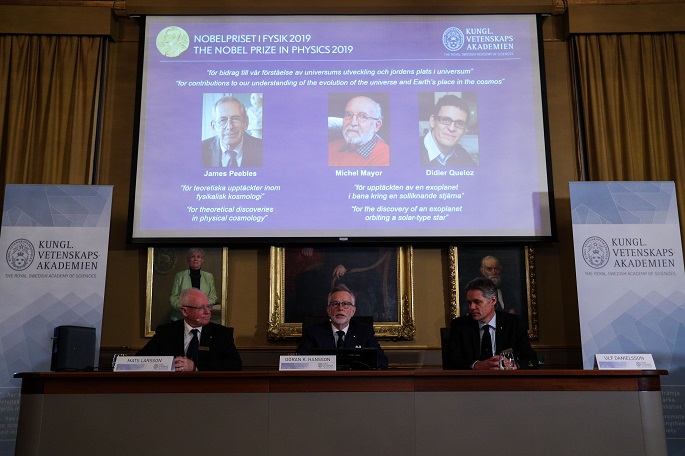 The 2019 Nobel Prize in Physics are shared by three scientists, the Royal Academy of Sciences in Stockholm announced on Tuesday.

The 2019 Nobel Prize in Physics, 9 million Swedish krona (about 1 million U.S. dollars), has been awarded with one half to James Peebles "for theoretical discoveries in physical cosmology" and the other half jointly to Michel Mayor and Didier Queloz "for the discovery of an exoplanet orbiting a solar-type star."

This year's Nobel Prize in Physics rewards new understanding of the universe's structure and history, and the first discovery of a planet orbiting a solar-type star outside our solar system. The discoveries have forever changed our conceptions of the world, said the Nobel Physics committee.

In a telephone interview during the press conference with James Peebles, he emphasized the importance of group contributions, and that he did not "work alone", and that his colleagues also made great contributions. He said it was along with "group working" that he got new ideas, and grew with it.

Peebles also gave an important advice to young people who intend to commit to sciences.

"My advice to young people entering science: you should do it for the love of science ... You should enter science because you are fascinated by it," he said.

"James Peebles' insights into physical cosmology have enriched the entire field of research and laid a foundation for the transformation of cosmology over the last 50 years, from speculation to science. His theoretical framework, developed since the mid-1960s, is the basis of our contemporary ideas about the universe," the press release said.

Peebles' scientific results "showed us a universe in which just 5 percent of its content is known, the matter which constitutes stars, planets, trees - and us. The rest, 95 percent, is unknown dark matter and dark energy. This is a mystery and a challenge to modern physics."

"In October 1995, Michel Mayor and Didier Queloz announced the first discovery of a planet outside our solar system, an exoplanet, orbiting a solar-type star in our home galaxy, the Milky Way. And this discovery started a revolution in astronomy and over 4,000 exoplanets have since been found in the Milky Way," according to the release.

"This year's Laureates have transformed our ideas about the cosmos. While James Peebles' theoretical discoveries contributed to our understanding of how the universe evolved after the Big Bang, Michel Mayor and Didier Queloz explored our cosmic neighbourhoods on the hunt for unknown planets. Their discoveries have forever changed our conceptions of the world," concluded the release.