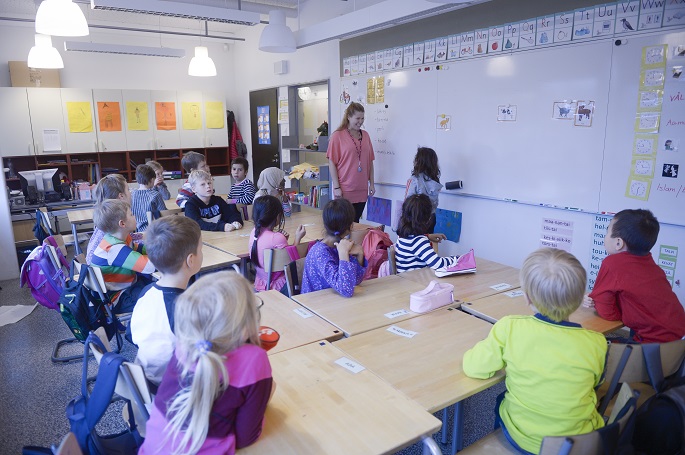 File picture of a school in Helsinki. Photo Source: City of Helsinki by Kimmo Brandt.

The system underlines self-guidance and the personal responsibility of pupils from the very beginning.

National broadcaster Yle broke the news recently about a school in the southeastern town of Lappeenranta, where parents had filed complaints to the regional authorities.

The complaints held the view that it is too demanding for primary school-age pupils (aged 7-10) to plan their weekly schedules on their own and then to adhere to it. Some parents have transferred their children to other schools.

Anu Liljeström, the education director of Lappeenranta, responded to Yle that the self-guiding role of pupils is indeed given preference in that particular school. She admitted that the change from the previous situation is huge, but it looks like pupils themselves have "acclimatized to the change better than the parents."

Yle reported on Friday that following its initial report on the problems on Thursday, many teachers contacted Yle and thanked it for bringing the problem to public focus.

Terhi Aalto-Setala, a child psychiatrist at the National Institute for Health and Wellbeing, suggested rethinking whether "the reform was going in the right direction.. She welcomed in-depth discussion of the impact the tuition reform has on pupils.

Aalto-Setala said on Yle on Friday that "self-guidance" is a positive goal, but it is now being applied to far too young children. She reminded that for a school-beginner, even functioning in a group or learning patience in waiting may be challenging. "For many primary level entrants the capabilities required in being self-guiding are a light year away," she said.

The child psychiatrist said that, in her opinion, the self-guidance system leads to less than optimal learning results even among those who would be able to attain better. "Not to mention those with worse starting capabilities. They get left behind at the start."

She gave a theoretical example of a ten-year-old boy. "If he is given the choice whether to take an easy, middle-level or high-level test in mathematics, he would be likely to take the easiest choice," Aalto-Setala believed.

People contacting Yle have had varying opinions, and some also support the new system. "Without self-guidance and personal critical attitude, we cannot solve the major problems of the future," said one person.

The disappearance of traditional classrooms has bothered many. In the Lappeenranta school under spotlight, teachers consult their pupils in a small arena. Yle showed pictures of pupils sitting on cushions and working on their laptops.

When the general noise level is high, teachers no longer yell everyone to be quiet, but distribute ear protective headphones to those who are disturbed. A critic said the school environment now resembles the "open plan" offices of corporations.

The National Union of Teachers is aware of the situation. Jaakko Salo, the development director at the union, told Yle that the new curriculum is still in the break-in phase and local alterations can be made. "Schools in Finland have large autonomy. In the last instance, it is the teacher who decides what kind of pedagogic will be applied to a group," Salo said.

Although no overall process has been reported to correct the new system, a partial change is under way to make assessment of school success more reliable. Marjo Rissanen, a counsellor at the National Education Agency, told Xinhua that a project has been launched to create national guidelines for assessing pupils.

Scores in semester reports were largely replaced with descriptions already earlier, and the trend has taken over in the new system, except in the final report at the end of the school years. This has led to a situation where evaluations given in one school may not be comparable with evaluations in another. The national directive has only defined what "8" (out of 4-10) means in each subject.

Currently, giving marks is obligatory only in the final report at the end of the nine-year study. There is an intention to demand it also at earlier grades, but no decision has been taken yet.

In a media release this past May, the Education Agency noted that "ascertaining and securing equality of the assessments of pupils has raised concern both in families and among professionals." The agency noted that the national guidelines in the current curriculum have been "too much subject to interpretation." It is hopeful that the ongoing project will define at which grade "number assessment" must begin.

Rissanen underlined that Finland is not returning "to the old system", but rather developing the assessment process.