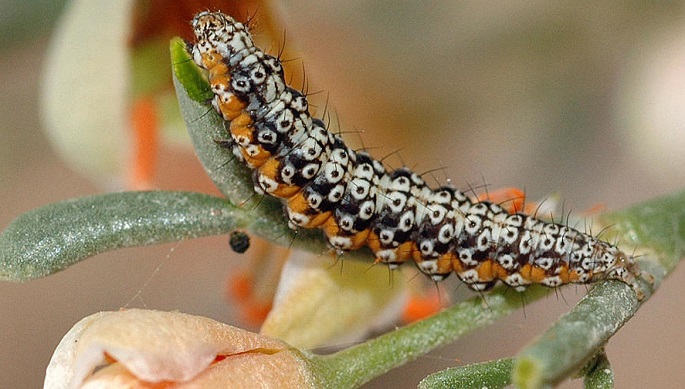 The caterpillars of Ustyurtia zygophyllivora have distinct warning coloration, an indication of their toxicity. Press Release Photo by University of Helsinki by Pavel Gorbunov.

Two moth species new to science belonging to a previously unknown genus and family have been found in Kazakhstan, constituting an exceptional discovery, said a recent press release of University of Helsinki quoting a study.

In the recently completed study, researchers of the Finnish Museum of Natural History Luomus and their collaborators have described two moth species new to science. In addition, the Ustyurtia zygophyllivora and Ustyurtia charynica species belong to a newly-described Lepidoptera genus and family.

Discovering a new family of moths is comparable to researchers specialised in mammals finding entirely new species not belonging to any known mammal family, such as cats (Felidae) or bears (Ursidae), but rather representing an unambiguously new and distinct family.

What makes the discovery special is the fact that the species live in Eurasia, a region known relatively well in terms of its butterflies and moths. This is evidence of there being regions even on our continent with still-unknown species.

“It’s also exceptional to describe a family on the basis of species which had never before been seen. New families are from time to time described, but such descriptions are mainly based on the reclassification of the relations between known species,” said Lauri Kaila, principal author of the study and senior curator at the Finnish Museum of Natural History Luomus, which is part of the University of Helsinki.

The family is the missing link between Urodidae and other moths

“First, we found one undescribed species, which led to the discovery of another. Based on their structure, the species first appeared to belong to the false burnet moth family Urodidae, but closer observation revealed that in terms of both structural and genetic characteristics they actually belong to another, previously unknown group,” said Maria Heikkilä, a postdoctoral researcher from Luomus and one of the authors of the study.

The study is based on material produced by Kari Nupponen on the distribution of Asian butterflies and was carried out in cooperation with researchers from the University of Oulu and the Russian Academy of Sciences.