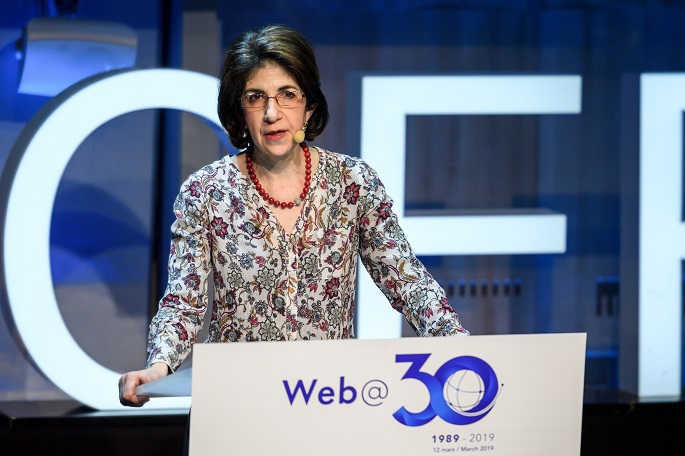 The European Center for Nuclear Research (CERN) celebrated the 30th anniversary of the World Wide Web (WWW) on Tuesday, with Tim Berners-Lee, designer of the WWW, together with other scientists calling for helping the other half global population who still has no access to the Internet to get online.

The celebration kicked off with a short panel discussion involving Berners-Lee and a group of scientists and industry partners at CERN outside Geneva on Tuesday morning, which was part of a 30-hour trip by the father of the WWW who would then travel to London and later to Lagos, Nigeria, for a series of celebrating activities.

Recalling the birth of the WWW, CERN Director General Fabiola Gianotti highlighted that the web showed the power of fundamental research to drive innovation. "Basic science, with its ambitious goals, brings cutting-edge technology and development in many areas, and can impact the society in a profound way," she said.

Today, half of the world's population is online and close to 2 billion websites exist. The web has been an incredible and powerful tool to reach out to all humanity, to break down barriers, to bring education and information to all, and thus to reduce inequalities, the CERN chief concluded.

Berners-Lee explained on CERN's role during the birth of the WWW, which he said was largely attributed to the diversity and freedom of research at the institution. "CERN allowed researchers to choose to use whatever computer and systems they like, which created a dire need for interoperability of information," he said.

He believed that it's more urgent than ever to ensure the other half of the world are not left behind offline and that everyone contributes to a web that drives equality, opportunity and creativity.

While the web has created opportunity, given marginalized groups a voice, and made our daily lives easier, Berners-Lee said that content produced on the web are not as reliable as it used to be, as it has also created opportunity for scammers, given a voice to those who spread hatred, and made all kinds of crime easier to commit.

Also as pointed out by other experts at the panel, the web is increasingly centralizing as the next billion people getting online may be increasingly dependent on major Internet giants like Facebook and Google, who have been playing more of a gatekeeper role during the centralization and have "basically built surveillance machines."

To address those problems, Berners-Lee suggested, in an open letter published on Monday, creating both laws and code to minimize state-sponsored hacking and attacks, criminal behavior, and online harassment; redesigning systems in a way that change incentives; understanding existing systems and modeling possible new ones or tweaking those we already have.

In March 1989, while working at CERN, Tim Berners-Lee wrote his first proposal for an Internet-based hypertext system to link and access information across different computers. By the end of 1990, he had implemented key components, namely html, http and URL, and created the first Web server, browser and editor.

In April 1993, CERN released the latest version of the WWW software into the public domain and made it freely available for anyone to use and improve. This has since encouraged the use of the Web and society to benefit from it.