Oscars 2019: A slam dunk for diversity 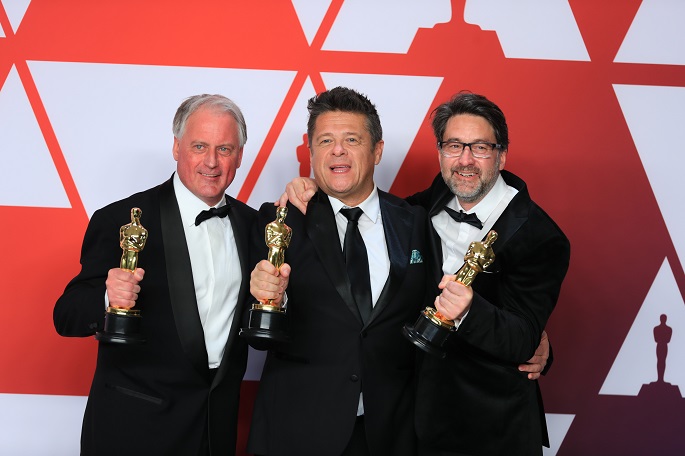 Paul Massey, Tim Cavagin and John Casali, winners of the Best Sound Mixing award for " Bohemian Rhapsody," pose for photos in the press room during the 91st Academy Awards (Oscars) ceremony at the Dolby Theatre in Los Angeles, the United States, on Feb. 24, 2019. Photo Xinhua/Li Ying.

Hollywood celebrated its 91st annual award celebration Sunday night. Despite the usual kvetching and complaining, the Oscars are undeniably evolving.

Critics will have a hard time overlooking the fact that Hollywood's most prestigious award ceremony, derisively referred to just a couple of years ago as #OscarsSoWhite, did an about-face this year, granting 17 out of 24 wins to minority artists or films exploring racial issues.

"Bohemian Rhapsody," a film about an openly gay rock star, sung its way to the most wins, with four in total, while "Green Book," "Black Panther" and "Roma" claimed three awards each.

Best Picture, the Oscars' highest honor, went to "Green Book," a story that examines race relations in the racially charged 1960s through the eyes of a bigoted white bouncer and the highly educated, world-class black pianist he chauffeurs around the South.

The extraordinarily talented Alfonso Cuaron, who hails from Mexico, walked away with three Oscars for "Roma," his tone poem for the Mexico of his youth -- one for Best Director, Hollywood's second highest honor, a second for Best Foreign Language Film, and a third for Best Cinematography.

"Roma is not what you would call Oscar bait, you know? ... Most importantly, audiences around the world and the Academy are embracing a character who is a domestic worker from an indigenous background," said Cuaron feelingly. "There is so much talk of diversity, and some progress has been made, but definitely the Hispanic Americans, and specifically Chicanos, are really, really badly represented still."

When was the last time three of the top actor awards went to people of color? Answer: Never.

McDaniel is best known for her role as "Mammy" in 1939's "Gone with the Wind," for which she won the Oscar for Best Supporting Actress, the first Oscar won by an African American entertainer.

Next up, from the writing team of "BlackKklansman," Spike Lee is only the third African American to win the Best Adapted Screenplay Award since John Ridley in 2013 for "Twelve Years a Slave" and Geoffrey Fletcher in 2009 for "Precious."

"Without April Reign, #OscarsSoWhite, and the former president of the Academy of Motion Picture Arts and Sciences, Cheryl Boone Isaacs, I wouldn't be here tonight. They opened up the Academy to make the Academy look more like America," said Lee backstage after his Oscar win.

"One of the great things about being able to make 'Bao' is I got to do a lot more research and really dive into my Chinese heritage. I kind of took it for granted," Shi told Xinhua after winning her award.

"I also learned how universal the theme of food bringing families together is," she added.

Best Animated Feature was snagged by "Spider-man: Into the Spider-Verse," the first win in this category by an African American director, Peter Ramsey.

Best Documentary Short went to "Period. End of Sentence," a feminist doc about menstruation in India. The director of the film, Rayka Zehtabchi, became the first Iranian American woman to win an Oscar.