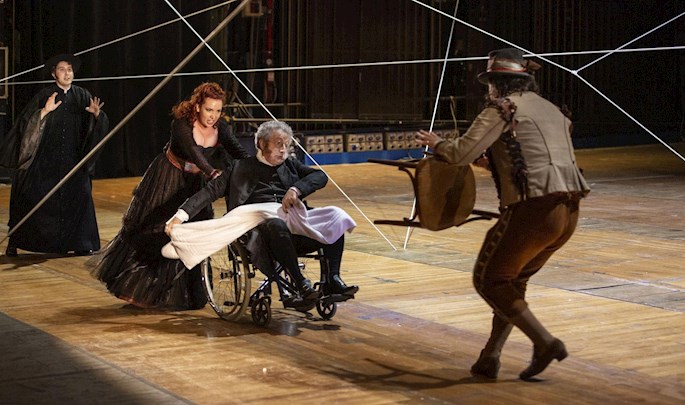 A photo provided by Teatro dell'Opera di Roma of a performance of The Barber of Seville directed by Mario Martone. Photo: EFE.

Italy’s historic operas, which have been closed to the public because of the pandemic, have had to reinvent themselves, joining forces with television and the internet to keep the music on their stages and reach their home-bound audiences, reported EFE-EPA.

December in Italy is the month of the opening of its lyrical theaters which open their seasons with new productions of the classics by Verdi, Puccini, Rossini or Donizetti, to name just a few.

However, the restrictions imposed by the second coronavirus wave have forced them to close their doors to the public since November for the first time since the war.

To navigate this new normality, these coliseums of the arts have turned to television and social media with new formats to reach their audience that is no longer filling their booths and boxes, and won’t be doing so until the virus is no longer a public health threat.

The Opera in the capital opened its season on December 5 with a new production of "Il barbiere di Siviglia" (1816) behind closed doors which was broadcast by the Italian public television, RAI.

Theirs was a completely original proposal: Rosina and the Count of Almaviva became entangled in their romance, behind the back of the sullen Don Bartolo, in a completely empty theater, leaving the stage and taking the plot to the stalls, corridors, stairs, the royal box and even out to the street.

The production, overseen by filmmaker Mario Martone and directed by Daniele Gatti, hit the screen with almost 700,000 viewers, a success for the institution. "It is the audience we have had in theaters for three years," its superintendent, Carlo Fuortes, tells Efe.

This is "a way to grow the audience and attract many people who do not go to the opera", such as young people, he says.

The pandemic has left a deep scar on the Rome Opera’s accounts, with box office losses of 12 million euros this year (in 2019 the profit was about 15 million). To get ahead they are considering taking their recorded works abroad.

"We are working with RAI to take them to television stations around the world. It's a unique product and it would be very nice. I know that the RAI is working all over Europe to bring this beautiful opera (Il barbiere) to TV audiences," Fuortes says.

Rome, the opera that saw the birth of "Tosca" a hundred years ago, awaits the return of the public with the new year, while exploring new formulas, because he believes that "the pandemic should not be a waste of time", and does not rule out the broadcast of the masterpieces online.

The San Carlo Theatre in Naples, the oldest opera in Europe, built in 1737 by the man who would eventually become Charles III of Spain, has not been burdened by its century-old history, establishing a fruitful alliance with Facebook to stay in touch with its public.

On December 4, the theater inaugurated its season with a "Cavalleria Rusticana" that was broadcast on the popular social network at a price of 1.09 euros per virtual ticket. The result: 50,000 people purchased and views exceeded 100,000.

The theater, which celebrated "an audience like that of a stadium", on Thursday repeated the formula with a concert by Mozart and belcanto.

And everything points to the fact that digital delivery of the performances is here to stay. Its leader, Stéphane Lissner, is finalizing a virtual platform where they will broadcast their shows from April, in addition to lectures or workshops, to complement the irreplaceable live performances.

"This opera has a public mission and should not wait for the public, but go to it," he says in defense of his project, which has been financed with two million euros of European and regional funds.

Finally, the prestigious Scala in Milan had to give up its long-awaited opening on December 7 for the first time since World War II, instead offering a concert behind closed doors but broadcast on television.

The show "A riveder le stelle", with a score of artists from all over the world, such as the tenors Plácido Domingo or Juan Diego Flórez, was a resounding success that had 2.6 million spectators in Italy and many others who followed it for Eurovision.

This unprecedented proposal of La Scala represents "the will of a theater to stay on its feet, to communicate with the entire world and send a positive message," its superintendent, Dominique Meyer, acknowledged in statements to EFE at the end of the show.

Soon this coliseum will join the strategy of using television and the internet to offer its concerts, although what it really hopes is the return of the public, particularly those audience members from abroad, who make up a third of its spectators each year.

But Meyer is not celebrating just yet: "This year we have made a huge effort, but next year will be more difficult when we resume activity, because it will be difficult to make the public return out of fear," he suspects.