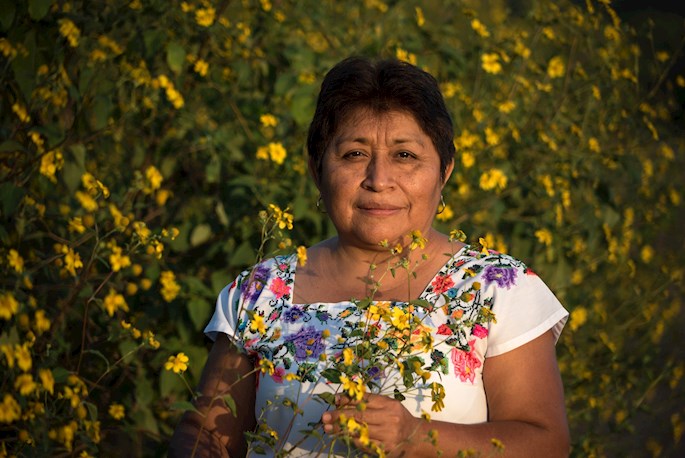 Mexico's original peoples still exist and maintain their "abilities and knowledge to propose alternatives and other ways of living," and thus they must be made "visible," said Maya leader Leydy Pech on Tuesday after being awarded the Goldman Environmental Prize for her struggle, and triumph, against genetically modified crops.

"The prize recognizes the work in defense of our territory, which we've historically had as the Maya people. Because we've had a struggle in defense of our territory (with) the entry of an industrial agricultural model, a model of development that has consequences in our main ways of life," Pech told EFE after being honored with the award known as the "Environmental Nobel Prize."

The Maya beekeeper, 55 and a native of the southeastern municipality of Hopelchen, in 2017 - along with her community - got the Mexican government to revoke the permits granted in 2012 to agriculture giant Monsanto to grow genetically modified soybeans after a five-year fight.

"The Maya communities still exist and we're working in our communities, in our territory, with this ancestral knowledge that our grandparents bequeathed to us," she said after praising how the "sustainable" food production methods of her community have allowed her people to survive for millennia.

The fight that ultimately resulted in Pech receiving the Goldman Prize ended in 2017 but the Maya people's hardships have not ended, and the award "provides the possibility to make visible" the indigenous peoples' situation brought about because of this new development model that overexploits natural resources.

"We have problems of pollution in the water due to the excessive use of insecticides. We see gaps, where no rules or laws exist that could regulate these insecticides or prohibit their use in territories where we have this full biodiversity," she said.

The "guardian of the bees," as she is widely known, also noted the work the Maya are doing to defend their native-bred strains of corn and way of working the fields, a mode of production that allows the soils to rest periodically and rejuvenate, thus creating "a harmonious diversity for the environment."

"This whole thing is the issue of deforestation. Nowadays, the agricultural borders have grown significantly. And that is also very important because on this hill which is being deforested and in this forest that is being lost many things that we (the Maya) need to survive are integrated, like the medicinal plants, the pollen and the nectar that the bees need," she said.

The Maya Train is one of Mexican President Andres Manuel Lopez Obrador's signature projects and is intended to revitalize Mexico's southeastern region with a total estimated investment of some $5 billion to build 1,554 kilometers (about 963 miles) of railway in five states in the region: Tabasco, Campeche, Yucatan, Chiapas and Quintana Roo.

The indigenous peoples in the areas traversed by the railroad line, which is under construction now, in a popular consultation approved the project, but Pech admitted that it poses a "concern in the community."

"The consultation was not enough because I think that all the procedures that are being used to undertake the consultation have not been appropriate," she said, adding that she is convinced that the way in which the project is being pursued does not allow the region to "advance," despite the ostensibly good intentions.

Mexico's population includes 68 indigenous peoples with a total self-identified membership of 25.7 million, according to official figures.

The Goldman Environmental Prize is a prize awarded annually to grassroots environmental activists, one from each of the world's six geographic regions: Africa, Asia, Europe, Islands and Island Nations, North America and South and Central America. The award is given by the Goldman Environmental Foundation headquartered in San Francisco, California. It is also called the Green Nobel.