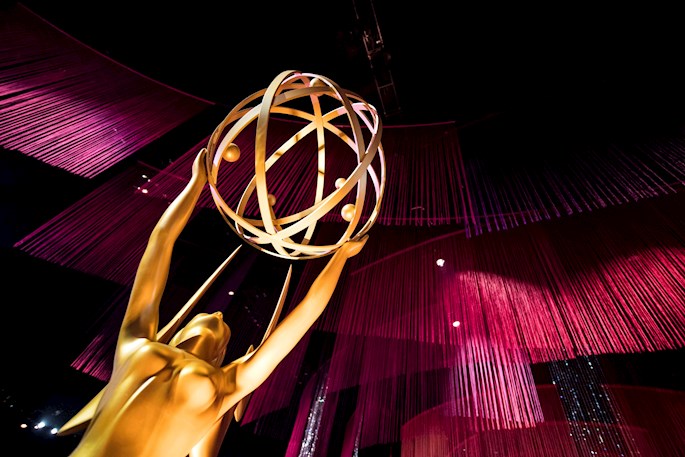 A file photo of the Emmy Award statuette, which depicts a winged woman holding an atom. Photo: EPA-EFE.

Television productions and performers from India, Brazil and the United Kingdom took home the top prizes here Monday in the 48th edition of the International Emmy Awards, which were held virtually for the first time due to the coronavirus pandemic.

This year's gala, which is produced by the International Academy of Television Arts & Sciences and recognizes excellence in television programming produced and aired outside the United States, featured only its host, American actor Richard Kind, and a handful of award presenters gathered at New York City's Hammerstein Ballroom.

Indian crime drama web television series "Delhi Crime," released on Netflix on March 22, 2019, only took home one of the 12 awards handed out during the one-hour, 15-minute gala, but it was the biggest one of all - Best Drama Series.

Written and directed by Richie Mehta, the series is set in the aftermath of the brutal gang rape and murder of a 23-year-old woman on a private New Delhi bus in 2012, a case that sparked widespread outrage in India and around the world.

"I dedicate this award to all the women who not just endure the violence that so many men inflict on them, but are then tasked to solve the problem. Finally, to the tireless mother, and her daughter. Not a day goes by when I don't think about you both and what the world subjected you two to. And I hope none of us ever forget that," Mehta said in his acceptance speech.

Veteran British actress Glenda Jackson, 84, whose past honors include two Oscars, a Primetime Emmy Award and a Tony Award, won Best Actress for her role in "Elizabeth Is Missing," while "For Sama," a British documentary that tells the story of a young woman's experiences as a journalist and rebel during the 2011 Syrian uprising, took the prize for Best Documentary.

Brazilian productions took home a pair of awards: "Ninguem Ta Olhando" (Nobody's Looking), which was honored in the Best Comedy Series category; and "Orfaos da Terra" (Orphans of a Nation), which took the prize for Best Telenovela.

New York Gov. Andrew Cuomo, for his part, received the 2020 International Emmy Founders Award for the 111 consecutive televisions daily briefings (viewed by more than 59 million people) that he gave during the worst months of the pandemic in the Empire State.

A group of famous New Yorkers - Spike Lee, Robert De Niro, Rosie Perez, Ben Stiller, Billy Crystal and Billy Joel - appeared in a short video to express their thanks to Cuomo for his leadership.

"In the darkest days of the pandemic, your daily briefings live from New York gave us hope, gave us clarity, gave us the truth and gave us something that we were not getting from Washington: leadership," Crystal said.

In his acceptance speech, Cuomo said his Covid-19 presentations were not "well-choreographed, scripted (or) rehearsed" but added that they "offered only one thing: authentic truth and stability."

French production "Vertige de la chute," a documentary about a community of dancers that try to save the Municipal Theater in Rio de Janeiro, Brazil, won the prize for Best Arts Programming.