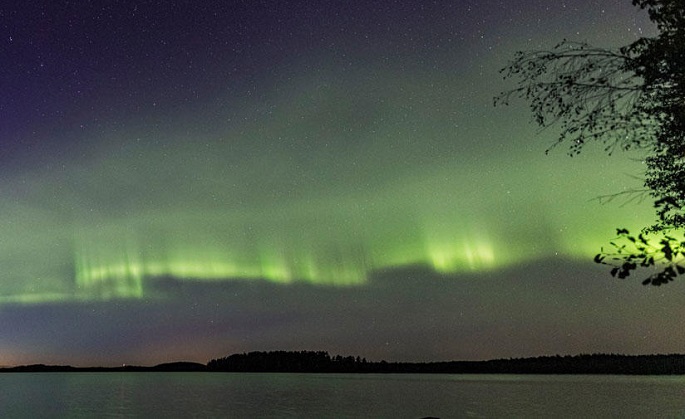 The auroral dunes appear as a green-tinged and even pattern of waves resembling a striped veil of clouds or dunes on a sandy beach. Press Release Photo by University of Helsinki /Photo Kari Saari.

Finnish hobbyists have discovered a new form of northern lights, the dunes, together with space researchers of Finnish Meteorological Institute and Helsinki University.

The new form of northern lights was first discovered in 2018 in photos taken by hobbyists that worked together with the Finnish Meteorological Institute. They named them as "dunes" as they resembled dunes of sand on a beach. Their color is green. Several occurrences of phenomenon were later found by observation cameras as well.

The dunes are likely to be waves of oxygen atoms at a height of about one hundred kilometers, which will shine a stream of particles from the sun, according to the institute.

In a recent study, the birth of a dune is traced back to a "wave channel" that is created around the mesosphere, a particular layer of the atmosphere and its boundary, the mesopause. The study also proposes that the new form of northern lights will make it possible to investigate upper atmosphere conditions in a new way.

Minna Palmroth, professor of the University of Helsinki, on Wednesday described the results of the research on the dunes "as an astounding discovery" as it would represent a previously unobserved mechanism of interaction between the ionosphere and the mesosphere above it.

Palmroth noted in a press release by the University of Helsinki that the area between 80 and 120 km above earth is one of the "least researched areas of the earth" as it is challenging to measuring instruments.