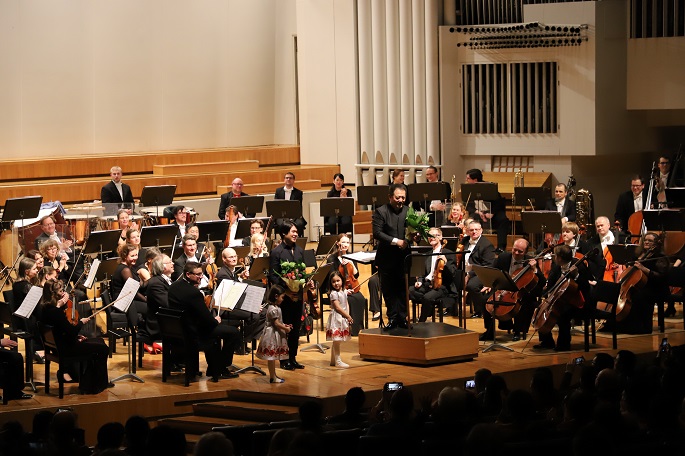 The Chinese conductor Lv Jia, as well as the Chinese violin player Huang Mengla, accepted flowerers after their performance. Photo by Xinhua.

The concert started with a symphony composed from Chinese folk music Flower Drum of Fengyang, giving the audience a festive boost. Butterfly Lovers Violin Concerto led the audience into the legendary world of a classic Chinese love story.

Chinese New Year has been celebrated in Helsinki for 14 consecutive years, but this is the first time a symphony concert was offered for the celebration.

Lv told Xinhua that the Finnish audience had a high expectation for the concert and had shown great enthusiasm. "Music is an international language which can bring peoples together, and help them better understand each other," he said.

Huang, winner of Paganini International Violin Competition in 2002, said: "The Butterfly Lovers Violin Concerto is a representative piece of Chinese music, while symphony is an art form with which western audience are familiar. I think the concert is a kind of innovative way to celebrate Chinese New Year in a foreign country and will help tell Chinese stories to the world."

The violinist also told Xinhua about the fun moment at a concert held on the eve of the Chinese New Year in Turku, southern Finland, when Chinese musicians taught the audience to speak Happy New Year in Chinese.

Organized by Finland-China Artists Association and supported by Chinese Embassy in Finland, the Chinese New Year Symphony Concert was held also to mark the 70th anniversary of the establishment of diplomatic relations between China and Finland.