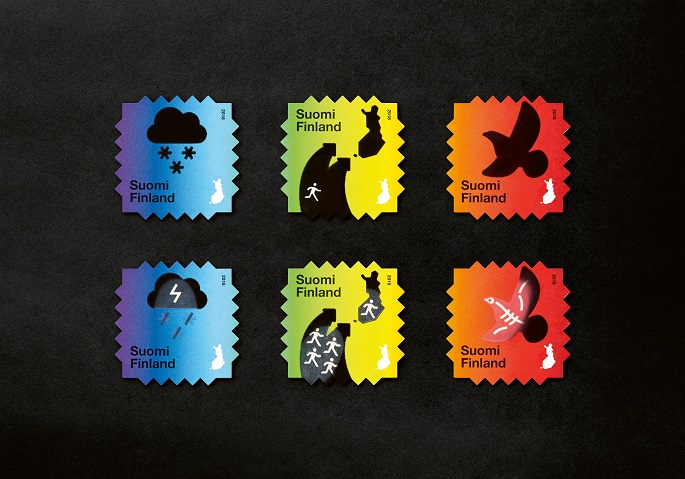 The Climate Change stamp received the esteemed Red Dot design award. In the EUROPA stamp competition, the Whooper Swan stamp came in third place according to votes from both the expert jury and the public.

In addition, the Sound of Silence stamp was selected as the world’s best stamp issued during 2013–2017 in the Nexofil Awards.

The Climate Change stamp, designed by Timo Berry, is the first Finnish stamp to receive the internationally esteemed design industry Red Dot award. The stamp was awarded in Berlin on Friday, November 1 in the Publishing and Print Media category of the Brands & Communications Design series.

In total, 8,697 works from 54 different countries were sent in to the various categories of the Red Dot competition. The winning pieces were selected by an international expert jury of 24 people. What the judges appreciated about the Climate Change stamps was their theme and idea as well as the quality of the design and technical implementation.

The three stamps on the Climate Change stamp sheet, published in September 2018, depict the effects of climate change that a northern country such as Finland can expect in the future if we allow the climate to continue getting warmer at the current rate.

A specialty of the stamps is the heat-reactive ink that changes color when touched with a finger. By the mere touch of a finger you will be able to see what we can expect in Finland if the constant warming of the climate is not brought under control.

“Curbing climate change is one of the greatest global challenges of our time. We wanted to highlight this important social issue in our stamps,” said Design Manager Tommi Kantola at Posti.

The Whooper Swan stamp that participated in the national bird-themed EUROPA stamp competition was released last May.

The stamp’s designer Erik Bruun decided not to present the whooper swan with the most traditional illustrations. The stamp which was sent to the competition was a simplified vertical stamp. Bruun had cropped the swan so that just the head and neck were showing.

Erik Bruun’s clear graphic style stood out from the rest and pleased both the EUROPA competition’s six-member jury as well as the large audience that voted online. Both selected the Finnish stamp as the third best. In total, postal administrations from 56 countries participated in the EUROPA competition with stamps depicting the countries’ national birds.

25,000 votes were given in the EUROPA online voting. The winner of the online voting was Armenia with a stamp depicting swallows. Turkey came in second place with a Krueper's nuthatch on the stamp.

“Finland has been successful in the EUROPA stamp competition throughout the years. For instance, the Wilderness Bridge stamp came in second place in the jury’s voting in 2018, and the Snow Castle stamp placed first in 2017,” Kantola said.

The Sound of Silence stamp, designed by Stiina Hovi, was published in February 2017 as part of the Calm and tranquil stamp series depicting Finnish lakes during the different seasons. Finns voted the Sound of Silence as the most beautiful stamp issued in 2017. Posti released a reissue of the popular stamp in March this year.