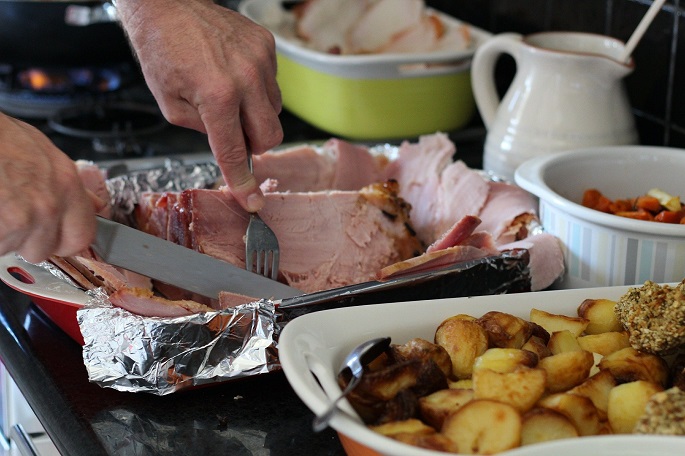 Christmas ham - specifically the upper part of the pig's leg baked in owen - has retained its position as the leading Finnish Christmas food, but is being challenged for the lack of merits in carbon reduction.

A survey done by the retail chain Lidl in Finland last year indicated that while 82 percent of Finns regarded ham as a must for Christmas, ten percent wanted, however, to reduce the role of pork on their festive tables.

Red meat has become part of the climate debate due to the carbon foot print impact of its production and consumption. Statistics of the Natural Resources Institute Finland (Luke) indicate that five percent of the 10,300 kg annual personal carbon footprint of a Finn comes from eating red meat.

While the pork industry does not deny the carbon statistics, it would like to see a more just way of presenting the burden.

Soile Kakonen, health and nutrition manager of HKScan, one of the leading pork producers in Finland, told media on Wednesday that the way of calculation of carbon footprint distorts the picture. It is presented that 560 grams of CO2 is produced per 100 grams of pork consumed, whereas the number is well under 200 grams for vegetable.

Kakonen said there are efforts now to develop the carbon foot print measuresments in such a way that it would also take into account the nutritional value of the product. "You really cannot compare meat with a leaf of salad. They are in different categories."

The Finnish meat industry says the carbon foot print of Finnish pork is lower than the European average, as 65 percent of it comes from the fodder the pigs get.

"The share of soy has been brought down to five percent of the life time food intake of pigs in Finland, and replaced with domestic proteins," Kakonen said.

In a recent release by the University of Turku, Kaisa Linderborg, assistant professor in food sciences, noted that soy as a nutrient is not a problem, but its cultivation is associated with environmental challenges and its transport to Europe causes emissions. Linderborg praised the Finnish meat production for its disassociation with soy.

The pork industry faces no acute crisis. Anne Terimo, marketing and product development director of HKScan, said Finns will be eating roughly six million kilos of Christmas ham this year. The amount has been the same in recent years, but consumers tend to buy smaller-sized hams.

In an environmental action arranged by the industry for the past three years, waste fat from the household preparation of hams is being collected and recycled. The waste fat is taken to the Neste Oil refinery to be used for making diesel. The waste fat from preparing one normal size ham gives three kilometers drive of a diesel car on the road, HKScan said. So far 100,000 kg has been recycled.

The appeal of pork at Christmas in Finland is such that even totally vegetable-based products take the look and preferred disguise of ham.

One of them comprises mainly seitan, a food flour made from wheat gluten and other vegetable ingredients. In the oven it looks like a ham, and when mustard coating pepper and syrup are added, it smells like a ham.

Anni-Mari Syvaniemi, director of the Finnish Food Information Society, told Xinhua that even though the growth of "meat-replacement" products is huge, the shift in overall consumption is not large. "There is a delay in the transition, but the meat industries have awaken towards the change," she added.