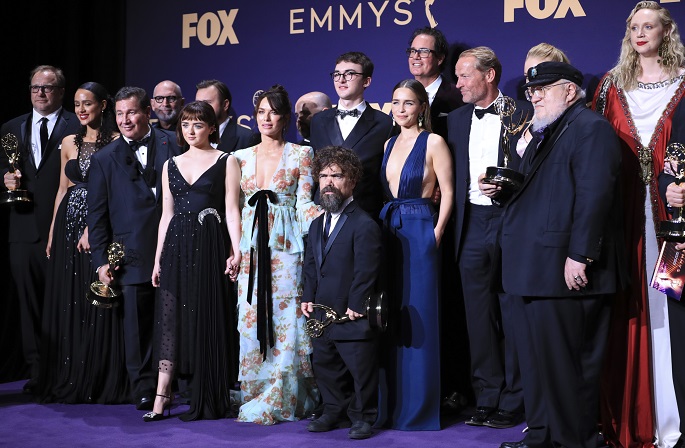 Cast members of "Game of Thrones" pose with the award for outstanding drama series during the 71st Primetime Emmy Awards in Los Angeles, the United States, Sept. 22, 2019. Photo Xinhua/Li Ying.

Held at the Microsoft Theater in downtown Los Angeles, the ceremony was one long series of shocks and surprises as underdog contenders swept away the favorites to take home the gold.

Though falling short of the sweep it had been expected to make for its final season, "Game of Thrones" bounced back with the Emmys' top award, Outstanding Drama Series, while the Outstanding Supporting Actor in a Drama Series was nabbed by Peter Dinklage.

"Game of Thrones" also took home 10 technical Emmys, bringing its total Emmy count to 12 for 2019 and a staggering 59 throughout its entire eight-year run -- a record that will be hard to beat.

"I count myself so fortunate to be a member of a community that is all about tolerance and diversity, because nowhere else could I be standing on a stage like this," said Dinklage. "It has been 10 years of the most incredibly talented, funniest people I've ever worked with. We literally walked through fire and ice for our producers."

When asked about how they reacted to the viewers' controversy surrounding the ending for Daenerys Targaryen, lead actor Kit Harington told Xinhua, "We can't get caught up in that because, in the end, we did what was right for the characters," while Emilia Clarke, the Dragon Queen herself, told Xinhua with a shrug, "That's just part of the job."

In another upset, the Outstanding Supporting Actress trophy which industry pundits predicted would go to one of the magnificent "Game of Thrones" female leads, was instead snapped up by Julia Garner for her intense turn in "Ozark."

"The writer has created such a layered character for me," she told Xinhua.

"I find writing really hard but the reason I do it is: THIS!" she said, holding up her award. "It's nice to know a dirty, pervy, messed up woman can make it to the Emmys!"

One of the major upsets involved Sandra Oh. Many thought she would be the first Asian woman to take home the gold for her compelling performance as lead actress in "Killing Eve." Instead, her co-star, Jodie Comer, got it.

Another surprise win saw Billy Porter sprinting past Harington and "Better Call Saul"'s Bob Odenkirk to come in first in the Outstanding Lead Actor in a Drama Series category.

Another newcomer, Jharrel Jerome, nabbed an Emmy for Outstanding Lead Actor in a Limited Series or Movie for his portrayal of Korey Wise in Netflix's "When They See Us," causing a stirring standing ovation and salute from prominent members of the African-American community.

"Chernobyl" did well at the Creative Arts Emmys last week and was radiant on the stage on Sunday as it took home the Outstanding Limited Series award and "Black Mirror: Bandersnatch" took home Best TV Movie.