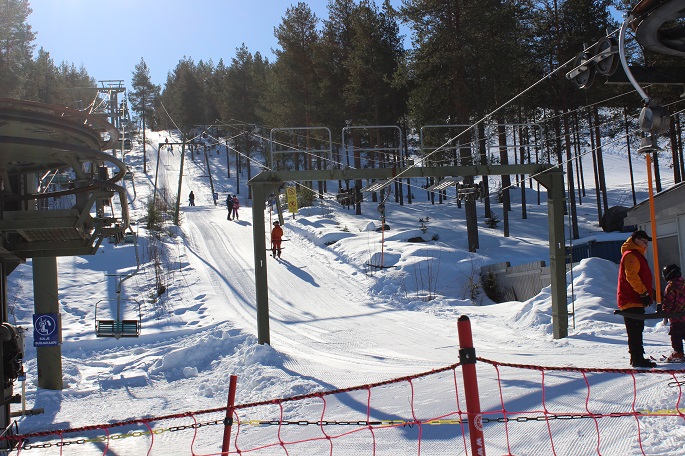 As September 2–8 Rovaniemi Week with the theme ‘Kotikulmilla’ — city districts and its outskirts–some snapshots of the theme-areas would not be too uninteresting.

Let’s pick Ounasrinne.  Ounasrinne is Ounasrinne and Ounasvaara combined — a district of Rovaniemi about four kilometres off the city centre in the east.

Residents of the Ounasrinne District are provided with civic amenities of all kinds through various services units as it is done in other districts. In addition to Ounasvaara Ski Resort, Santa Sports Centre, Ounashalli, Lappi Arena, and Lapland Provincial Hospital have lent much importance to this place for both local residents and tourists.

The Ounasvaara Ski Resort in the north of the Ounasvaara Mountain is famous for ski, downhill ski, snowboard, etc during the winter while in summer it is famous for downhill cycling tracks or mountain bike track and also trekking along the marked paths.

Ahead of the Rovaniemi Week the Daily Finland correspondents spoke to some residents of Ounasrinne to know their experiences of living in the locality.

Osmo Jurvelin, a 59-year-old retired person and former electronics mechanic who lives in Ounasrinne, said he is satisfied with the civic facilities available in the locality. “The area has well developed now than it was a decade ago. We live here peacefully. We have library, market, two pubs, ski resort, biking place and golf centre. The good thing is the bus timing and the best thing is the hospital is nearby. I think there should be a few cheaper markets like Lidl. There should be also some cheap apartments for housing the pensioners and low-income people,” Jurvelin said.

Another resident of Ounasrinne, who worked at Lapland Central Hospital, emphasized the need for initiatives to attract more tourists. “We should be more attentive towards attracting tourists to the area. The arrival of more tourists will bring more earning and create job opportunities for us. I think there should be some more markets. But I am pretty happy about the way the authorities keeping the citizen safe,” he said preferring anonymity.

Petri Tanninen, a home appliance installer (kodinkoneasentaja) who lives in the Ounasrinne, said, “I like the area very much because it is quiet and peaceful. The ski resort is nearby. We have almost everything that we need. But there is no shopping mall in the area. I feel the need for a shopping mall here.”