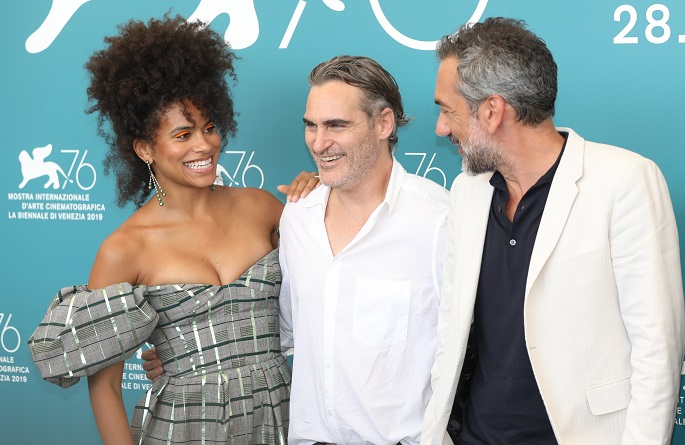 Set in a Gotham City between late 1970s and early 1980s, the story is an original exploration of the well-known nemesis of comic superhero Batman -- Joker the criminal mastermind.

Yet, here Batman has no role.

The standalone story of the origins of Joker -- as developed by the director -- and an impressive interpretation of the character by Joaquin Phoenix offers a never-seen portrait of the man behind the mask.

Phoenix's Joker starts as Arthur Fleck, a clown-for hire living in a dark and broken-down Gotham with a fragile mother, hoping to become a stand-up comedian one day.

He has a past of mental troubles and psychiatric hospitalization, and struggles to make ends meet and keep his peace of mind.

More than this, he is a man struggling to find his own place in a violent and merciless society, until any hope to gain kindness, love, and recognition is lost to him.

The passage from the man Arthur to the mask Joker is gradually and attentively developed, both emotionally and mentally.

Phillips and Phoenix stressed they worked hard for months in order to understand and represent the complexity of Arthur-Joker, his originality and unpredictability.

"I wanted the freedom to create something that was not identifiable...and I did not want a psychologist either to be able to identify the kind of person he is," Phoenix said at the film's press conference.

An in-depth effort to shape Joker's laughter -- a sort of chilling signature of the fictional character -- was also carried out by the actor.

"Even before I read the script...Todd described to me this laughter as almost painful."

"And ultimately, I think it is a part of him (Joker) trying to emerge, and I thought that was a very interesting way of looking at this laughter, because we all kind of presume what the Joker's laughter is, and this felt like a new, fresh way of looking at it," Phoenix said.

The director stressed shaping the role of Arthur-Joker was "a kind of work that has never really stopped."

"Even on the last days (of shooting), we were constantly finding new things about Arthur and Joker that we loved and wanted to dig into," Phillips explained.

He added the fact that no previous attempts had been made to describe how Joker became Joker -- on the screen, or in the original comics -- proved helpful.

"It was very liberating, because there was really no rules and no boundaries...we just kind of pushed each other every day, until we come up with something totally insane," Phillips said.

Preparing for the role of Joker also required Joaquin Phoenix an intense physical preparation, entailing a strong loss of weight.

"I started from there (the weight loss)...and, as it turns out, that also affects your psychology, you really starts to go mad when you lose so much weight in a short time," the American actor said.

The movie's main cast includes Robert De Niro in the role of a popular talk show host, and Zazie Beetz in that of a single mother and Arthur's neighbor.

"Joker" is one of 21 films competing for the Golden Lion in the main selection of the 76th Venice Film Festival, running on Aug. 28-Sept. 7 at the Lido of the Italian lagoon city.