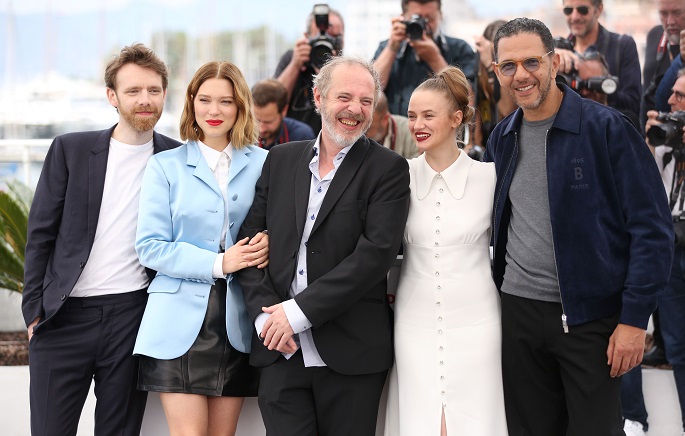 "When I work on a project, I normally have six or more movies playing with each other, but for this film I took only one, from director Alfred Hitchcock," said French movie director Arnaud Desplechin about his movie "Oh Mercy!", which was in competition at the 72nd edition of the Cannes Film Festival.

The film is about a police chief in a "difficult" city in northern France, who tries to solve a case where an old woman was brutally murdered. There are two female suspects, both hit by the adversities of life.

"Hitchcock was a true maestro, the most imaginative, fictional, baroque and full of fantasy, but in one of his masterpieces, he decided to stop for a moment with all these dreamlike elements," Desplechin told Xinhua in a recent interview.

"In 'The Wrong Man', where we see Henry Fonda in one of his best roles, Hitchcock completely abandoned everything and decided for once to stick to reality," Desplechin explained.

Regarding the important inspirational path, the French director stressed: "I love this film, so I said to myself I also want to create a similar experience, I wanted to film something that I didn't know and that I had never experienced. Normally in my films you see bourgeois and privileged characters but here I wanted to work on low-income people in very difficult social contexts."

For Desplechin, the goal of cinema is to explore different atmospheres and he knew that in order to develop as a filmmaker he had to go through a challenging path: "Now I feel I made the right choice," he said.

Speaking about the genesis of the film, Desplechin added: "My moral way of working is to think that no-one owns the truth, there are multiple truths, one for the actor, one for the character, and in this movie there is an obsession with the truth."

Talking about his inspirations, the French director recalled the first time he traveled to Newark in the U.S. He was very excited to visit the city where American writer Philip Roth set all his noir novels, which Desplechin had read with passion. "But when I arrived there I found only a few dirty roads, while Roth was able to create a myth around that area," he said.

To follow his dreams, Desplechin fled rapidly from his provincial town where there was no cinema because "I was dreaming something which at that time appeared inaccessible to me. Now I was happy to come back to my city and film this area that I have never filmed before. I dedicated myself to filming a minority group of people and thanks to this project I found the occasion to get back a part of myself," he said.

There are two passions that nourish and push Desplechin: his reality and his four actors. Everything is based on them and they helped create a film based on real facts, because with this film, he abandoned his fiction.

"My cinema references are also all about Italian neo-realism, cinema is the place where we live, poetry is there under our feet and we just need to lower our knees to catch it," he said.

Turning to his stage work, the French director explained that it is important to give actors roles that they have never had the opportunity to play, where they can experiment and transmit something different.

"Oh Mercy!" will be distributed in China by Time In Portrait together with two other titles from the main competition of the Cannes Film Festival.

Desplechin has directed five other movies that have been screened in competition at the Cannes Festival: La Sentinelle (1992), Comment je me suis disputé...(ma vie sexuelle) (1996), Ester Kahn (2000), Racconto di Natale (2008) and Jimmy P. (2013). He was a member of the Official Competition jury at the 69th Cannes International Film Festival in 2016.