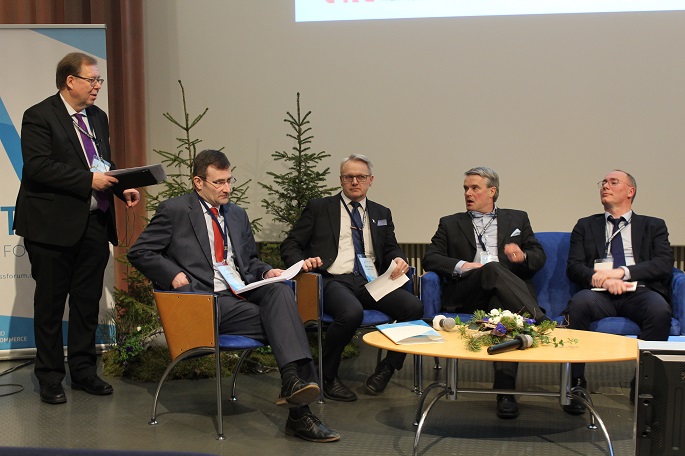 The 9th Arctic Business Forum (ABF) on its opening day arrived at the near consensus that the region’s transport infrastructure, including the planned Arctic Railway, now embodies the paramount investment priority in order to ensure the growth of Arctic business.

“There are a wide range of natural resources in the Arctic and they need transportation. The cargo may include from minerals and ore to fish products, timber, and wooden products,” said Centre for High North Logistics Managing Director Kjell from Kirkenes of Norway while taking part in the ‘great Arctic Railway debate’ held on Wednesday. “In the future,” Kjell said, “natural resources from the Barents region and cargo from the Northeast Passage could be transported with the Arctic Railway.”

Sitowise Oy Area Manager Pirkka Hartikainen, on the other hand, shared some pessimistic views about the immediate profitability of the Arctic Railway project. “The estimated profitability is challenging. For all we know, all the railway options are non profitable at the moment,” he told the debate.

Finland plans to form a joint working group with Norway which will examine the key issues like environmental impacts, permit procedures, costs, finance structure, and the model related to the routes chosen for the Arctic Railway.

“We are trying to think big,” observed Hartikainen, quipping that “Hopefully, my children and grandchildren will travel with this railway.”

In this regard, Murmansk Region Chamber of Commerce and Industry President Anatoly Glushkov spoke about the main transport infrastructure projects approved by the Kolarctic Programme. The projects include reconstruction of the Lotta Road linking the Murmansk Region with Lapland, Kirkenes of Norway, and Finland and reconstruction of the Raja-Jooseppi cross-border point between Finland and Russia.

The conference participants hailing from across the Arctic region also identified the wind power, oil and gas sector as well as energy transmission and the mining industry as other key areas in need of investments. In addition, they emphasised the importance of cross-border cooperation for boosting business in the European Arctic.

This year, the two-day annual business summit is being held at the Kemi Cultural Centre. Lapland Chamber of Commerce Board of Directors Chairman Juha Mäkimattila, Kemi City Mayor Tero Nissinen, and the economic and commercial counsellor at the Chinese Embassy in Finland, Sun Liwei, addressed the inaugural session of the forum on Wednesday, with Lapland Chamber of Commerce President and CEO Timo Rautajoki acting as the moderator.

Mäkimattila in his speech gave an overview of the current state of Arctic business. “Export of goods has posted a year-on-year growth of 18 per cent from 3.5 billion euros to 4.2 billion euros.”

“In 2018,” the business magnate said, “the investment plans in Lapland are going to focus on the mining and forest industries and on tourism.”

Mayor Nissinen in his address detailed out the highlights of his city’s 150th foundation anniversary celebrations next year. The city plans to achieve the status of the Arctic Bio Capital in 2019 by promoting wooden buildings and developing year-round sustainable tourism. “The planned projects present a very interesting investment potential,” said the mayor.

In his turn, Sun Liwei presented China’s Arctic policy, which prioritised protecting the eco-environment of the region through international cooperation.

As in the previous years, the Arctic Business Yearbook 2018, compiled and edited by Lapland Chamber of Commerce Chairman Timo Rautajoki and Deputy Director Viivi Lakkapää, was launched in the forum to depict the developments and trends in investments and business in the European High North.

“In Lapland, tourism experienced the biggest boost in 2017 posting a nine per cent growth year on year. The year saw the total number of registered overnight stays by tourists to rise beyond 2.9 million, marking a 22 per cent year-on-year growth and earning an added value of 1.48 million euros. The number of overnight stays in Lapland by the domestic tourists, however, suffered a two per cent drop to 1.43 million from that in 2016. This means, for the first time, international tourists achieved a majority share of 51 per cent of the total number of overnight stays by tourists in the Finnish Lapland,” Rautajoki wrote in the yearbook’s preface.

The ABF will wrap up on Thursday after holding a discussion on the competitiveness in Arctic business and another on the state of business in the European Arctic.