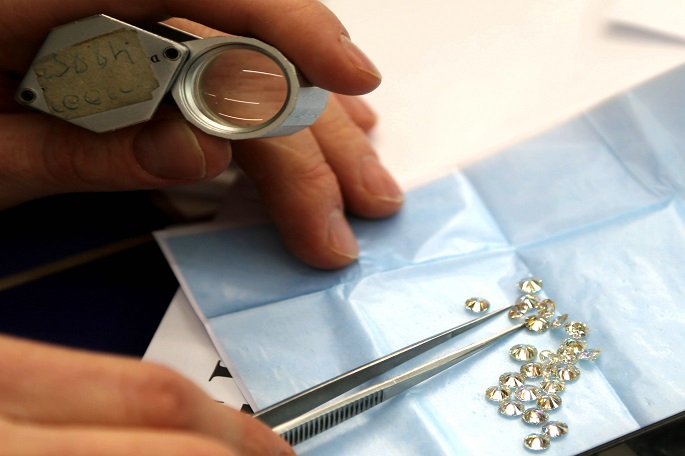 Loose diamonds are pictured at the International Diamond Week in Israel (IDWI) in Ramat Gan, Israel, on Feb. 10, 2020. Photo Xinhua.

Hundreds of international diamond industry representatives have gathered and expressed worries about the profit prospects at the International Diamond Week in Israel.

The event is held from Monday to Wednesday at the Israel Diamond Exchange located in the Israeli central city of Ramat Gan, where is a complex of buildings that is considered to be one of the leading diamond industry centers of the world.

Ramat Gan mayor, Carmel Shama Hacohen, expressed his vision at the opening ceremony about expanding of Israel's diamond district with new massive, advanced buildings to be added to the current ones.

About 200 exhibitors and 300 business buyers of diamonds from around 20 countries arrived at the convention. It is the largest of Israel's annual event in the diamond industry.

Among participants were diamond leaders from around the world, including presidents of main diamond bourses and heads of leading companies and organizations in the field.

President of Russian diamond giant Alrosa, Sergey Ivanov, said at the event during his keynote speech that last year was very challenging to the diamond industry.

Furthermore, shifts at the diamond industry itself accrued, including "structural changes in jewelry sales, technological advancements, and of course, evolving perception of a new generation of consumers."

The technological innovation didn't pass the diamond industry, and after many years of development, the lab-grown diamonds become a real alternative to the mined diamonds.

Diamonds produced by humans are cheaper, conflict-free, mining free. Their production chain would make it more difficult for criminals or militias to use that precious material to finance atrocities.

During the festive event, participants from the traditional diamond industry spoke about the emerging competition of artificial diamonds as not a critical threat to the established business.

The overall attitude to human-made diamonds was like fake diamonds, not the real thing, a synthetic, shining invention that can't possess the heritage and the symbolism of the original, rare, and hard to find natural material.

"Though we believe that lab-grown diamonds will not affect our product in the long term, and blend in its own niche, it's of crucial importance to take actions aimed at clear differentiation between natural diamonds and the laboratory-grown ones," stressed Ivanov.

World Federation of Diamond Bourses president Ernie Blom told Xinhua that he is happy with the 2019 diamond jewelry turnover of 87 billion U.S. dollars, and in 2020 he hopes it could be higher.

But some other participants expressed worries about the industry situation. The diamond export from Israel reduced by 20 percent in 2019, said in an interview with Xinhua, Boaz Moldawsky chairman of the Israel Diamond Institute.

Moldawsky stressed that Israel is a leading country in the diamond industry, with seven-billion-U.S. dollar deals in 2019.

During the event, exhibitors showed merchandise total worth around one billion U.S. dollars, stated the organizers.

The primary purpose of the convention is to bring more new clients and deals to the Israel Diamond Exchange. The market based on the trust gained over time fueled with face-to-face meetings.

Chairman of the International Diamond Week Ezra Boaron told Xinhua that he believes buying natural diamonds is a way to express values of family and marriage.

On the contrary, the keynote speaker at the event Martin Rapaport, president of the Rapaport Group, debated if the young generation would continue to see and cherish the traditional values of the mined diamonds.

Rapaport even argued how the less willingness of the young generation to get married would affect the power of the diamond industry negatively.

He concluded that the meaning of diamonds meaning is in their worth, natural scarcity, and emotional value that brings financial value.

The young people are more aware of their shopping environmental footprint. They genuinely care about the impacts of what they buy on the world and humanity.

Diamond consumers are getting more and more interested in the origin of diamond jewelry. The flow of information allows a better understanding of the world.

"They want to be sure it is non-conflict, responsibly sourced, provides a benefit to society, that human rights at every stage of pipeline are duly respected, environment and people not harmed," stressed Ivanov.