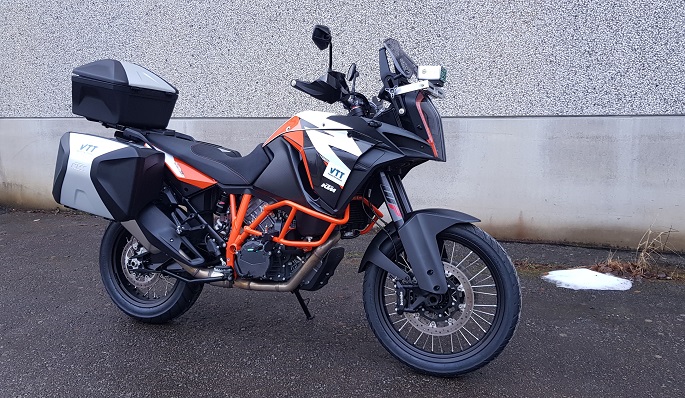 The vehicle safety systems and sensors are intended to make motorcycles more visible to other vehicles and traffic safer and more efficient than before, said a press release.

VTT has received international recognition for the development of automated vehicles and their sensors and software, especially for difficult conditions.

VTT is currently conducting research in more than ten international and domestic traffic automation and 5G and ITS-G5 communication projects and assignments. In addition to automated cars and machinery (Martti, Marilyn, Pate and eLvira), the research is now extended to also include powered two-wheelers (PTW).

The advancement of traffic automation has already introduced vehicles with smart sensors such as radars, laser scanners and cameras used for automatic image recognition into traffic.

These sensors are used in advanced driver assistance systems (ADAS) to detect and identify people, vehicles and objects located and moving in the vehicles' immediate surroundings. Human driving and perception errors are the main cause of traffic accidents, and only very rarely is a technical failure of a vehicle the biggest factor contributing to an accident. In the next few years, advanced driver assistance systems will evolve towards AI-controlled vehicles enabling automated driving.

In this scenario of the future transport system, it is important to consider motorcycles as well. According to Dutch studies*), the sensors of driver assistance systems in current passenger cars, such as adaptive cruise control radar or camera, do not detect, much less identify a motorcycle unless it is ridden in the middle of the lane and/or at least in the centre line of the car's direction of movement. In practice, the situation is even more challenging as regards smaller mopeds.

"Our work focuses on the development and research of vehicle environment perception and new communication systems. The aim is not to develop an autonomously ridden motorcycle; instead, the research emphasises the suitability and functionality of equipment, software and services operating in the motorcycle environment. The goal is to research and test how to make the motorcycle a smart part of the future transport system, and our research bike named Jarno plays an integral part in this", said Principal Scientist Aki Lumiaho from VTT's RobotCar Crew research team.

An essential part of the research is developing the wireless data transmission between motorcycles and cars, which can also be used in other lighter vehicles. This technology enables automated data exchange and communication between vehicles as well as between vehicles and infrastructure systems.

Communication is utilised in the development and piloting of driver and rider assistance systems for both cars and motorcycles.

"Present-day vehicles like traditional motorcycles can be considered 'oblivious' compared to automated vehicles. They do not themselves understand traffic conditions, situations or events, they are not sufficiently visible to the sensor systems of other vehicles, and they do not communicate with other vehicles or systems. When riding on motorcycles, all road safety factors depend on the motorcyclist, but also the drivers of other vehicles, that is to say, the human factors that make mistakes in traffic", Lumiaho said.