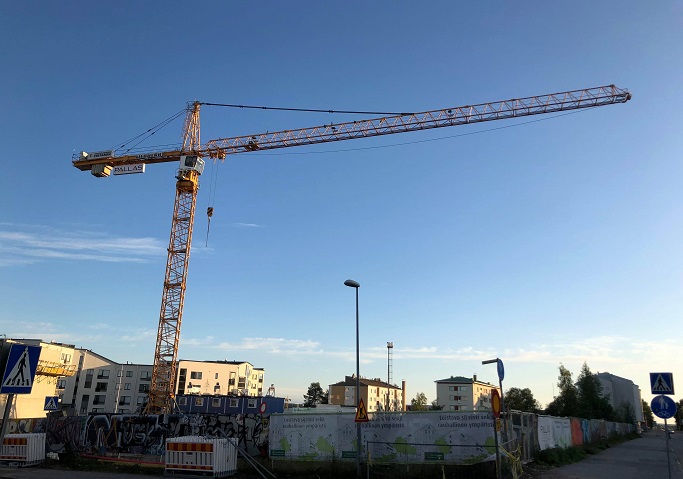 Construction production will remain this year close to its current level or decrease by at most two per cent from one year back, according to a report of the business cycles in the construction sector (RAKSU) group published on Monday.

Next year, construction production will fall by 1.5 percent to 3.5 per cent, said a press release of the Ministry of Finance quoting the RAKSU report.

A large number of new construction projects were started in the first half of 2019. Construction will continue brisk in the latter half of the year.

The construction of new blocks of flats is expected to decline fast, because building permits granted for blocks of flats have decreased during January to July by almost 20 per cent. The number of building starts is returning to sustainable demand. The RAKSU group assessed that construction will start on 37,000–38,000 dwellings in 2019. In 2020, there will be thousands fewer new dwelling construction starts.

The construction of production facilities is also expected to decline this year. Building permits for production facilities have fallen by just under ten per cent in January to July. An exception to this is manufacturing, which invests actively in the current year. The construction of buildings for institutional care and assembly buildings is also busy. Assembly buildings include e.g. sports buildings.

The general trend of increasing renovation building has slowed down clearly in the last few years. The RAKSU group predicts that renovation will grow by around 1.5 per cent in the next few years. Civil engineering is also estimated to grow both this year and next year as public sector projects increase.

The price development of construction is expected to level off as the number of construction projects to be started falls. The rise in the costs of infrastructure construction has also slowed down, particularly due to the fall in the price of oil.

The RAKSU group assessed that employment in the construction sector will fall during next year as construction production decreases.