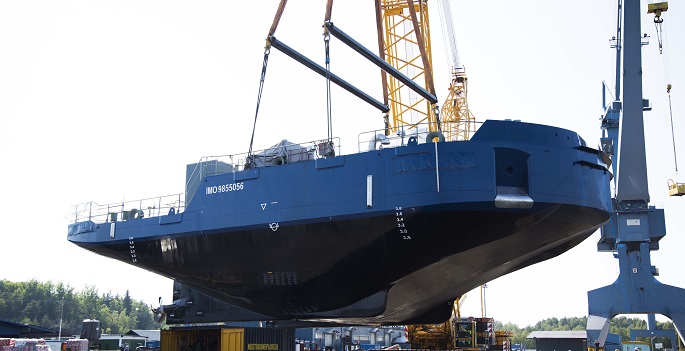 The bow started its test run on August 28 and after a test period the detachable bow will be deployed in the Saimaa area next winter.

WINMOS II (Winter Navigation Motorways of the Sea II) is an EU CEF-funded project for the development of winter navigation.

The project’s objective is to develop and improve winter navigation and its safety and to secure sufficient icebreaking resources in the future.

One of WINMOS II’s sub-projects focuses on the development and construction of a motorised detachable icebreaking bow to be used in the Saimaa area.

The detachable bow equipped with propulsion machinery is mounted to the tugboat by three-point fixing. The detachable bow has two straight axle lines driven by electric motors. The dimensions of the vessel and bow combination were designed so as to enable effective icebreaking operation in the Saimaa area and the Saimaa Canal.

After launching the detachable bow, its outfitting is continued, and the required pusher tug modifications are implemented. The tug and the bow are then fitted together for sea trials. The vessel will be available for FTIA’s tests in October, and it will be used for icebreaking operations in the coming winter.