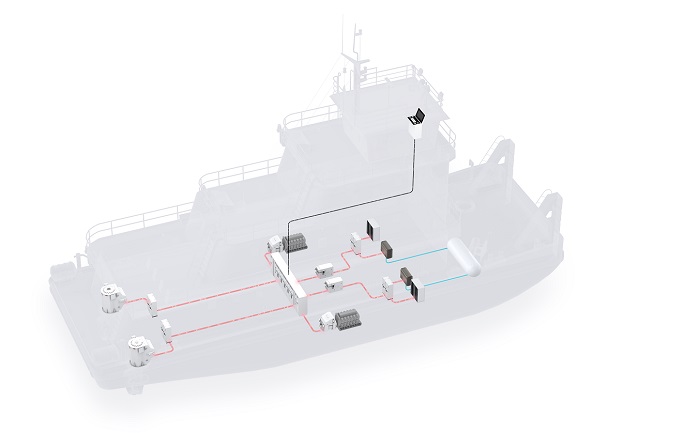 The FLAGSHIPS project contributes in building two new build vessels, one in Lyon, France and one in Stavanger, Norway. In Lyon, a hydrogen push-boat operated by Compagnie Fluvial de Transport (CFT) will serve as a utility vessel on one of its most demanding rivers, the Rhône. In Stavanger, hydrogen is intended to power a passenger and car ferry operated by Norled as part of the local public transport network.

The funds awarded to the FLAGSHIPS project have been granted from EU's Research and Innovation programme Horizon 2020 under the Fuel Cells and Hydrogen Joint Undertaking.

Green and sustainable shipping is a prerequisite for reaching national and international emission reduction targets. With increasing pressure for shipping to reduce harmful emissions, fuel cells and hydrogen are key technologies in providing a sustainable transportation option for the international shipping industry.

"Both the EU and the shipping industry see hydrogen as a key contributor in the work to mitigate climate change. The FLAGSHIPS project sets out to raise the readiness of hydrogen-powered waterborne transport to a new level globally", said Senior Scientist and Project Manager Antti Pohjoranta from VTT Technical Research Centre of Finland who will be coordinating the project.

The project aim is that both vessels will run on hydrogen produced from renewable energy. This will not only enable truly zero-emission operation of the ships, but also create a solid basis for further local zero-emission transport deployment both at sea as well as on land.

"Norled has taken a leading role in the development of zero emission ferries. This innovation project will be an important next step when it comes to proving the maritime fuel cell technology and illustrating its business viability. By leveraging knowhow from existing onshore and marine system integration activities the project will also reduce the cost of marine fuel cell power systems significantly", said Norled CTO, Sigvald Breivik.

This innovation project will look at the possibility to replace biodiesel with hydrogen on one of the ferries to be built for the Finnøy-route north east of Stavanger. The route serves several islands with short and several stops, which makes it difficult to realize the effective shore charging required for battery-powered vessels. Norled's intention is to apply the hydrogen technology being developed by the company in several other ongoing hydrogen-related projects, such as building the world's first ship powered by liquid hydrogen for the Hjelmeland connection in Western Norway.

In addition to the project funding, significant additional investment to build the ships is made by the ship owners CFT and Norled as well as the consortium partners.

An important part of the project will also be the building of European support networks covering hydrogen fuel supply chains, vessel design and manufacturing competence networks as well as significantly broad-based regulatory expertise.

"FLAGSHIPS is a key project to demonstrate the superior features of hydrogen fuel cells in the maritime sector: Lower CO2 and pollutant emissions and reduced noise amongst the most critical. The project will cooperate with relevant organisations such as CESNI, IMO and certification bodies to speed up the introduction of hydrogen for the maritime sector both for inland and coastal operations and for freight and passenger transportation", says Bart Biebuyck, Executive Director of the FCH2 JU.

"We are facing a complex, but also new and innovative project for our group. We are glad that the European Commission is supporting this development and we hope that French and local authorities will follow to support and assist the implementation of this Hydrogen powered pusher in their environment", said Director of CFT inland transportation, Matthieu Blanc.

The project started on January 1st, 2019 and the hydrogen ships will start operation during 2021.